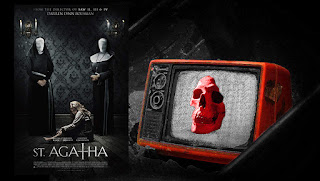 We love Halloween here at The DreamCage and we love the countdown to it even more as, every day in October, David Ames opens a window (well, writes an article) in his Hallow-vent Calendar of horror films. His choice for Day 2 of Hallow-vent is St Agatha... 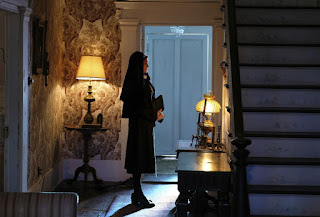 
Today’s film is one that I had heard a lot about. The reviews for it were pretty decent and, although it obviously had a very low budget, everything I have seen from it looked beautiful. I was immediately drawn to this film. It isn’t a Netflix original, but it did show up on my screen [it's on Amazon Prime in the UK - Ed], and so today I chose St. Agatha.

This film follows Mary (Sabrina Kern) as she leaves her old life behind and joins a Convent for wayward girls, run by Mother Superior (Carolyn Hennesy), a nun. It is set in the 1950s and Mary ,who is now pregnant, has decided on a new plan for her life.

Throughout the film, we are given numerous flashbacks which show us just how Mary came to be in her current state. She has an abusive alcoholic father and, in a moment of distraction, her little brother, the only thing in the world she really cares about, slips, hits his head, and drowns in a tub full of water. She feels constant guilt for this, as she was having sex with her boyfriend when it happened.

Fast forward to Mary’s arrival at the home. She is greeted warmly by the nuns, Mother Superior, and the other girls, but is immediately taken aback by the strictness of the environment. They are not supposed to talk, and they have chores they must complete every day. As the film progresses, Mary begins to discover that the convent is not at all what it seems, and the nuns are sadistic torture-artists who steal the children from these women and sell them for profit to couples who can’t have children themselves.

As much as it seems like I have given away a lot of the film, sadly all this is easily discoverable about 15 minutes into the movie. To be frank, it isn’t great. There are some solid moments of fright and both Kern and Hennesy are serviceable, if not good, in their roles. The writing is really where this film drops off the deep end. The dialogue is rough at best and the premise seems so poorly thought out that it feels as though they were just stumbling through the creation of the movie.

On the bright side, the music is VERY good. It perfectly sets the mood and there is a haunting piano theme that permeates most of the scenes in the film. It is one of the saving graces, along with the cinematography which actually looks really good.

What this film does well is some surprisingly disturbing body horror including self-mutilation, force-feeding (in the style of a momma bird), and eating vomit (although thank God, all we have to do is hear the last one). This movie isn’t great—I am going to be honest. What I will say is that the few things it does well are done REALLY well. The music alone is reason enough to check it out and Hennesy’s performance as the morally bankrupt nun is wonderful.