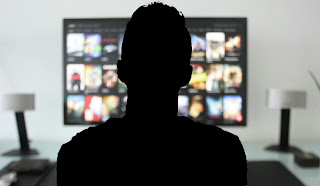 This is a well known phrase for fans of long running TV shows and is a way to ensure that everyone is up to speed with events before the story continues. Back in the days when your favourite TV show was aired weekly and you had to wait a whole 7 days to find out who lived, who died and who got really really emotional and shouted at someone again, this sort of recap was useful as life had happened since the last episode. But it also helped to get you into the right mindset and emotionally reconnect with the events and characters that matter so much to you. As a Doctor Who fan I used to love the weekly cliff hangers and waited with excitement until the following week where I would discover how The Doctor would survive his latest brush with death. We didn't know any other way to watch television and so it has always been until the introduction of television streaming services.

Netflix, Amazon and the other services have transformed television viewing for ever and it has changed us as well. Instead of waiting a whole week for the next episode you can watch them back to back and demolish entire shows with multiple series in the same time. Currently, I am watching Grimm and, even with 3 or 4 episodes a night, I am fast getting to the end of series 5 and have already started to plan what to watch next. Grimm originally aired in the traditional format of one episode a week but that was many years ago, now the entire Wesen universe is open to me all at once!

There is something to be said about this new way of watching as it is a lot easier to fully lose yourself in the story and the universe that has been created. I often wondered what it would be like to not have to wait a year to see the series cliff hanger resolved or to discover if there is even going to be another series. Personally, I hate investing my time only to find that some heartless TV Exec has vindictively cancelled a show before it ended properly. Maybe it's my OCD but I won't start watching a show if I know it ended prematurely, I can't cope with loose ends and unanswered questions! With new, exclusively licensed series it has become the norm for all episodes to be available from day one (Star Trek Discovery being a notable exception.) The advantage for TV bosses is obvious in that it's a lot easier to keep people watching when there aren't any gaps for them to wander off in. Equally, the flexibility to watch when it suits you 'On Demand' means that you don't build your life around television schedules they work around yours.

There are drawbacks to this "box set" mentality in that I find myself quite impatient when I am forced to watch episodic television weekly. Line of Duty is a good example as the wait between episodes is almost excruciating, as is the interminable gap between series. My brain is now conditioned to a new faster continuity and, it may well be my age, but I find it harder to regain the thread of what's gone before if there is a 7 day gap. Whereas, once, I used to find the "previously on Buffy The Vampire Slayer" recaps annoying, I now rely on them to remember and to 'get in the zone' so to speak. We have also lost a degree of communal viewing with everyone watching different shows at different times. The conversations at work the next day after a particularly climatic episode used to be part of the fun of investing in a TV series.

When all is said and done, it comes down to choice. By providing us all with access to the shows we love, we now have the choice of when we watch and how many episodes we view in one sitting. There is never a moment where there is nothing on to watch and now you never miss an episode. The Box Set has triggered a revolution within the Television Industry and now it can be truly said that the control is in the hands of the viewer.