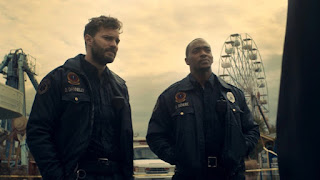 Justin Benson and Aaron Moorhead have been making original and intellectually intriguing genre films since Resolution (2012) and the highly unusual relationship drama Spring (2014), their last offering being 2017’s enigmatic, time-glitch mystery, The Endless.

Their movies have gleaned a substantial cult following and fans have been looking forward to the release of Synchronic since its announcement. The indie sci-fi has been described as a successor to cult classic Primer and is probably their most cinema-friendly, straightforward film to date.

The story concerns Steve (Anthony Mackie) and Dennis (Jamie Dornan) working as ambulance paramedics in New Orleans. They are colleagues supporting each other in a difficult job which consists of a nightly round of grim medical emergencies - shootings, stabbings and drug overdoses.

They also happen to be best friends despite leading very different lives - Dennis is dissatisfied in his home life and envies Steve his bachelor life of promiscuous sex and little responsibility, while Steve is growing weary of his empty existence and increasingly craves a family like Dennis’s, with a house and kids and a wise-cracking wife.

The paramedic duo find themselves called to a string of drug overdoses resulting in grisly and inexplicable deaths or accidents. Common to each scene is the use of a newly circulating, synthetic designer drug called ‘Synchronic’ which reportedly causes incredibly intense and realistic ‘hallucinations’.

When Dennis’s rebellious teenage daughter Brianna (Ally Ioannides) disappears while partying on the same substance, Steve, who fancies himself an “amateur physicist,” tracks down several doses, and, feeling that he has nothing to lose, decides to try an experiment.

Unbeknownst to Dennis, Steve has been diagnosed with a brain tumour that affects his pineal gland. This impacts his receptivity to the drug Synchronic and makes his response similar to that of the young people who form the majority of users.

Dennis tries all the avenues he can think of to track down his daughter but feel helpless in the face of wife Tara’s frustration (an underused Katie Aselton). He begins to isolate himself and to shut down emotionally, at a loss as to what to do to mend his disintegrating relationship with his family and also with his friend Steve, who he suspects is becoming addicted to painkillers, knowing nothing about his brain tumour.

In contrast, despite fighting his own battle with terminal illness, Steve is spurned into action, investigating the role the drug Synchronic may have had in Brianna’s disappearance. He finds the last few supplies of Synchronic and doses himself up, hoping that the experience may give him a clue as to what happened to Dennis’s daughter.

The results turn out to be far more than just hallucinatory. Steve is trailed by a scientist who explains that the drug doesn’t simply create vivid illusions, but reveals how, for short periods, it actually thrusts users bodily into the distant past. Whatever happens during their hazardous sojourn in past history has a real effect on their actual physical body. 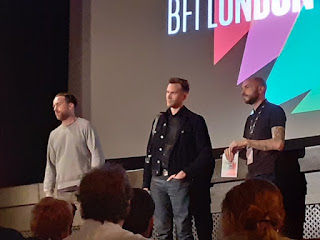 This premise allows Benson and Moorhead to create a story spanning timelines and loaded with striking visual effects. The duo remain incredibly hands-on - still scripting, editing and co-directing their movies. As with their previous films, the effects are remarkably impressive when we consider their limited budgets - you can see every penny being used onscreen, in the vivid imagery, in the eerie scenes, in the camerawork and editing, and in Jimmy LaValle’s pulsing score.

What may be most striking about this latest film is Benson and Moorhead’s increasing sense of cinematic confidence. Attuned to their faithful following they’re now pretty sure that their audience is going to buy into their premise and follow the storyline along its weird path. They also got lucky in attracting two such well-known leading men.

Anthony Mackie is particularly arresting, taking time out of his Marvel gig to shine in something which gives him more scope. He doesn’t waste the opportunity, building a buddy relationship with Dornan and making the most of the script’s moments of humour.

What I am personally most pleased to see is that Benson and Moorhead remain determined to tackle challenging or fantastical sci-fi ideas. I’m not convinced that Synchronic is one of their most original movies or that it’s going to be one of my favourites, but in the current cinematic climate, where it’s too often too easy to guess how movies will unfold, indie voices like Justin Benson and Aaron Moorhead’s continue to be more inventive and unique than most of the big-budget films produced by the major studios.