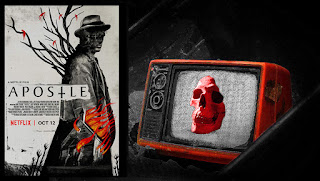 We love Halloween here at The DreamCage and we love the countdown to it even more as, every day in October, David Ames opens a window (well, writes an article) in his Hallow-vent Calendar of horror films. His choice for Day 15 of Hallow-vent is Apostle...

Sometimes we are shown films that elicit a guttural reaction in us. Whether it is because of scenes which make us feel uncomfortable, psychologically scarring scenes, or even pure gore, sometimes our body reacts on its own to films. Today was one of those days for me as I sat down to watch 2018’s period horror film Apostle.

Near the dawn of the 20th century, Thomas Richardson, an ex-Christian missionary, embarks on a journey to rescue his sister who has been kidnapped by a cult. This group of fanatics wants ransom money but instead of sending any, her brother Thomas sneaks onto the island, switching boarding passes with another person without their knowledge. When the group of newcomers, Thomas included, sits down to their first sermon, we first lay our eyes on the island’s prophet, Malcolm, who gives an impassioned speech about the founding of the island and about his ability for the god of the island to speak through him.

While this is happening, we see the man Thomas switched places with be brutally murdered by the three founders of the island, Malcolm, Quinn, and Frank. As Thomas navigates the island, he discovers that the inhabitants of this newly established land have customs such as frequent bloodletting, which we learn is to give to the god of the island. Malcolm and the others have enslaved the god of the island, known as Her, and are trying to force her to keep the land fertile and healthy. Every time she is fed blood, her tree-root prison begins to bloom, further trapping the deity.

As the owners of the land become paranoid about an intruder in their midst, Thomas saves Malcolm and is then welcomed as a brother. Malcolm’s daughter takes a liking to Thomas, and although he reciprocates those feelings, his mission is still to rescue his sister. Malcolm has taken to parading Thomas’ sister, Jennifer, through the town in hopes of drawing him out, but instead Thomas utilizes a tunnel underneath Malcolm’s house in order to try and rescue his sister.

While there, he has to hide in what can only be described as a river of blood, and while he is hiding there, a strange, ethereal, and altogether disgusting woman rises from the blood and pursues Thomas but he escapes into an ancient cave with paintings detailing the who and what the god of the island is.

I don’t want to give anymore of the plot away, but know that there are multiple side plots, all worth as much as the main story. I personally really enjoyed the atmosphere the film was able to maintain. The whole island has a strange sense of foreboding, and feels almost oppressive from the moment Thomas first arrives. The music adds to this and really helps to emphasize many emotions well, especially fear and tension.

Dan Stevens is a wonder in this film. It is hard to be put on screen with the likes of Michael Sheen (who is also incredible), but Stevens performs the role wonderfully and is the focal point of the entire film. He is a joy to watch in this role. Sheen is also his normal, perfect self. He plays the prophet with such honesty that it is hard to recognize him as the actor we’ve seen so many times. Sheen truly disappears into this role.

The rest of the supporting cast, especially Lucy Boynton, do what they do well. Boynton has a larger part in the film, and she does wonders with it. She is sexy and bright, but she plays convicted perfectly.

The camera work in this film is really the star. Not only does the movie look great, sound great and is acted great, Evans’ storytelling and use of the camera is incredible. It is frenetic and mobile, often times tracking the perspective of certain people, as well as moving rapidly during fight sequences of which there were a ton. This film is so violent and gory while not being over-the-top. It is a bloody mess in the best possible way.

This movie is a slow-burner but it is definitely worth the watch. It may not be as flashy as something newer, but Apostle accomplishes almost all of what it attempts. To me, it felt like an amalgam of The Heretics, Midsommar, and The Witch. I was very impressed and you will be to if you just give Apostle a chance.