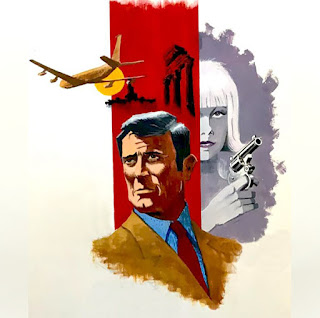 
I have always been a huge Bond fan and relish every new film with a kind of childish excitement. The success of the Bond franchise lies with the well-worn format that is never deviated from; the world faces a horrific threat from some super villain of other and only Bond can prevent complete devastation. There are always car chases, amazing gadgets, martinis and Bond being very friendly with an attractive lady. There is always a moment in the film that it looks like Bond won’t make it this time and yet you know he is always going to. Bond films are the epitome of popcorn entertainment, loud, brash and so, so, SO much fun. I have enjoyed all of the incarnations of Bond and truly struggle to name my favourite as all the actors have brought something different to the role.

So, when I was given the opportunity to review this recent spy adventure from Spiteful Puppet I was happy to oblige. Spiteful Puppet have a wonderful reputation for producing top of the range, high quality audio dramas and I am a huge fan of Barnaby Eaton-Jones and his endeavours. He has brought back my childhood TV favourite, Robin Of Sherwood, in a way I never thought possible and I am always interested in what he will do next.

Passport To Oblivion boasts a stellar cast, not least because it has a Bond in the title role. George Lazenby may not be everyone's top Bond but On Her Majesty's Secret Service had some tremendous high points. Who can claim not to be moved as [*Bond spoiler* - Ed] Bond holds his dead wife in his arms at the end of the film? In Passport to Oblivion, Lazenby plays Jason Love (yes, really) and is ably supported by the vocal talents of Terry Molloy, Nickolas Grace and THE TERENCE STAMP. I recognised Mr Stamp as soon as his character spoke as he has one of those voices that you can instantly identify. With a cast as high profile as this, Passport To Oblivion should prove to be a rip-roaring spy yarn and should stand in the gap while I await the new Bond film.

This last point, though, poses a problem in that, if the audio drama stays too close to The Bond Formula, it risks being reduced to an inferior copy. With the added issue that there are no glossy visuals to tantalise you, the production really has to fill in the remaining gaps with audio only. Relying on special effects and audio foley can go some of the way in this regard but the performances need to be outstanding as well. It has a hard task indeed to take the listener out of the home and place them into the world you are creating. Whilst Passport To Oblivion is a high class production, it manages to fall short in this respect for me and I need to explain what my issues were.

Bond-like pre-title sequence - check. Cheesy, slightly embarrassingly catchy title song - check. Opening scene in a kind of M led Ministry office - check. Cue screechy car driving silliness with Bond, I mean Jason Love at the wheel - check. You see what I mean? Passport To Oblivion is Bond Lite and it may well be that is what the production team were intending it to be. For me, as a die hard Bond fan, this isn’t a good thing and it may be because I am over familiar with the material but I found myself wandering off during the story, which is also entirely Bond-like and, as a result, I found the twists and turns were unsurprising because I had seen them so many times before. As you would expect from a globe trotting spy drama, it isn’t just set in the UK and the foreign accents often felt a little cliched, as did the Bristol accent used during one of Love's earlier encounters, although I know and support many actors who campaign for some of the lesser represented UK accents to be represented (When was the last time you heard someone with a Birmingham accent in a drama?)

There are also issues with the sound levels on the foley here and, in one scene, Love is interrupted by his car being driven off by some loutish kids. The screech of the tyres and engine revs were so loud you could be forgiven for thinking that Love was standing by the car and not in a house. I wonder whether there is a tendency to overcompensate on foley for audio, when you are all too aware that the visualisation isn’t something that would have required quite so much sound. Lazenby is typically, well, Lazenby in the production and there is a reason why he isn’t always picked as top of the Bond list. In some scenes his vocal delivery is a little too wooden for my liking and this seriously hampers my ability to connect with the lead character.

Don't misunderstand me, Passport To Oblivion is not a bad audio drama and should provide an entertaining afternoon for listeners. It just didn’t quite deliver on its promise for me and I wonder whether other Bond fanatics may find the same. As always with reviews this is purely my own opinion and I wish Spiteful Puppet every success with it. I shall go back to waiting for the much troubled and delayed Daniel Craig Bond epic that I know is just around the corner… possibly.

You can order Passport to Oblivion on download or CD direct from Spiteful Puppet.