Books - 100 Novels That Shaped Our World 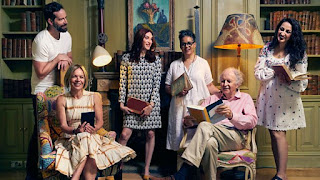 Tying into the BBC’s year-long celebration of literature, a BBC-assembled expert panel of six leading British writers, curators and critics have revealed their list of 100 English language titles that have shaped their world....

To mark the publication of Daniel Defoe’s Robinson Crusoe in 1719, a landmark moment 300 years ago thought to herald the birth of the English language novel, the books the panel have chosen are those that have had a personal impact on them. Divided into ten categories, their choices are wide ranging and inclusive and feature children’s books, contemporary classics, graphic novels, rollicking reads and some books that have contributed to a significant cultural shift.


The list, which includes contemporary works such as Bridget Jones’s Diary and His Dark Materials series to classics like Pride And Prejudice and Middlemarch, is designed to spark debate about the novels that have had a big impact on us all personally and culturally, and will form the basis of digital reading resources that will be made available on the BBC Arts website from January 2020. Everyone is encouraged to share their own stories on social media of the novels that have had the biggest impact on them, using the hashtag #mybooklife.

The panellists - all passionate readers with established literary backgrounds - are; Stig Abell, Syima Aslam, Juno Dawson, Kit de Waal, Mariella Frostrup and Alexander McCall Smith. Each member brought a different experience and point of view, reflecting the diversity of readers and resulting in a final list that is varied and exciting.


Stig Abell - Stig is the Editor of the Times Literary Supplement and a presenter on Radio 4 Front Row. From 2013 to 2016 he was Managing Editor of the Sun. He was formerly a fiction reviewer at The Spectator and reviewer at Telegraph Media Group as well as The Times Literary Supplement. His first book How Britain Really Works was published in 2018.

Syima Aslam - Syima Aslam is the founder and  Director of the Bradford Literature Festival (BLF), which she established in 2014. In just five years the festival has grown to a 10 day literary and cultural celebration, welcoming 70,000 visitors to Bradford annually. BLF has been hailed as ‘one of the most innovative and inspirational festivals in the UK’, bringing together literature from all genres, promoting intercultural fluency, providing a platform for marginalised voices, and reflecting the changing face of contemporary Britain through a programme which celebrates diversity, empathy and artistic excellence.

Juno Dawson - Juno is a bestselling novelist, screenwriter, journalist, and a columnist for Attitude Magazine. Her writing has appeared in Glamour, Dazed and the Guardian. She is presently adapting her 2019 novel, Meat Market for television. Juno writes full time and lives in Brighton. She is a part of the queer cabaret collective known as Club Silenco. In 2014 Juno became a School Role Model for the charity Stonewall.

Kit de Waal - Kit de Waal is an author and founding member of Leather Lane Writers and Oxford Narrative Group. She has won numerous awards for her short stories and flash fiction and her debut novel, My Name Is Leon, won the Kerry Group Irish Novel of the Year 2017 and was shortlisted for the Costa First Book Award and the Desmond Elliott Prize. The Trick To Time, her second novel, was published in 2018 and longlisted for the Women’s Prize for Fiction.

Mariella Frostrup - Mariella is a journalist and presenter. She presents Books To Live By on BBC Sounds and regularly presents Radio 4’s Open Book, interviewing authors and publishers and reviewing new fiction and non-fiction books. She is a presenter of The Big Painting Challenge on BBC One and a former presenter of the Books Show on Sky Arts 1.

Alexander McCall Smith - Alexander is an author and academic, who has written and contributed to more than 100 books including specialist academic titles, short story collections, and children’s books. The No. 1 Ladies’ Detective Agency series made him a household name, having now sold over twenty million copies in the English language alone.


The panellists will discuss their choices at a panel event from the British Library, chaired by Jo Whiley, which will be livestreamed onto BBC iPlayer and into libraries across the UK - on Friday 8th November at 1pm.

Jonty Claypole, Director, BBC Arts, said "We asked our prestigious panel to create a list of world-changing novels that would provocative, spark debate and inspire curiosity. It took months of enthusiastic debate and they have not disappointed. There are neglected masterpieces, irresistible romps as well as much-loved classics. It is a more diverse list than any I have seen before, recognising the extent to which the English language novel is an art form embraced way beyond British shores. Best of all, it is just the start of a year of documentaries, author profiles, podcasts and outreach events all designed to do one thing and inspire everyone, whoever they are, to read more novels because of the proven life-enhancing benefits it brings."

Mark Freeman, President, Libraries Connected, added "This amazing campaign lies at the heart of libraries’ mission to deliver innovative and engaging reading experiences to communities who need it most. Yet again, we would like to thank the Arts Council for funding this work which will enable libraries, in partnership with BBC Arts and grass roots arts organisations, to introduce new audiences to the joys of reading."

Here's the list, subdivided into the 10 categories: How many have you read of the "100 Novels That Shaped Our World"?