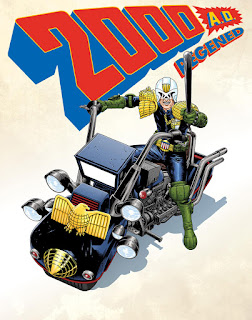 2000 AD’s all-ages special issue, 2000 AD Regened, is returning in 2020 with four new issues throughout the year, full of stories suitable for all ages...

Drawing on four decades of genre-defining characters while encouraging new readers to pick up the Galaxy’s Greatest Comic, 2000 AD Regened has something for everyone with a stellar lineup of talent on some of the biggest characters in comics, including Ilias Kyriazis (Collapser), Cavan Scott (Doctor Who), Nick Roche (Transformers), Rob Davis (The Motherless Oven), and more!

2000 AD editor Matt Smith said: “2000 AD’s 2019 Regened takeover issue was the best-selling issue of the year, so I’m excited to bringing the all-ages concept to four issues across 2020. We’ve got some great stories and artwork lined up – many by creators making their debut for the title – so I hope these will go down equally as well with readers young and old.”

In the first issue, a young Judge Dredd must defeat an interdimensional invasion in Cadet Dredd: School Trip by Rory McConville and Ilias Kyriazis; the lone genetic infantryman enters dangerous ground in Rogue Trooper: Savage Swamp by Cavan Scott and Nick Roche; ghost-hunters Eliot and Meera tackle an entity loose in a graveyard in Finder & Keeper: Dead Signal by Leah Moore and John Reppion and Davide Tinto; and the timid aliens from Strontium Dog, the Gronks, have a fierce new neighbour in The Gronk: The Trouble with Gronkses by David Baillie and Rob Davis.