Documentary - A Song of Peace 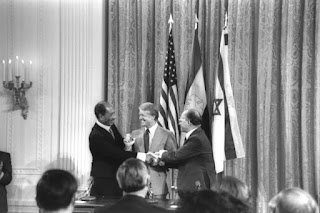 Tony Cross watched A Song of Peace, a documentary that gets its UK premiere tomorrow at the UK Jewish Film Festival...

2019 is the 40th Anniversary of the Peace Treaty signed between Israel and Egypt, or to make it all about the personal, Menachem Begin and Anwar Sadat. As part of Jewish Film Festival on November 10th they are showing ‘A Song of Peace’ following by a panel discussion, chaired by Dina Shiloh and featuring Professor Gerald Steinberg, Ed Husain and Dr Menna Abukhadra.

Alas, I can’t make the actual event itself, but I got a chance to watch ‘A Song of Peace’, which is an episode from a television series called ‘Begin: The Leadership Years’. It covers the election of Begin as Likud Prime Minister and his attempts to put together a peace treaty. Begin isn’t the sort of politician whose track record makes him a peacemaker. He had been one of the leaders of Irgun and here we come to an interesting point. So, let me pause for a moment.

Who Irgun are depending very much on where you’re standing. To the British, they were a terrorist organisation. They were responsible for the bombing of the King David Hotel where 91 people were killed and 46 injured, for example. To the Palestinians they’re also terrorists, responsible for the Deir Yassin massacre*. To the Jews of Israel, they are freedom fighters. In the documentary Begin himself says, ‘We weren’t terrorist, we were freedom fighters.’ It is an oft quoted phrase that one man’s terrorist is another man’s freedom fighter and nowhere is that clearer than in the foundation of the state of Israel.

Begin then knew what war meant. He had fled Warsaw in World War Two, but his mother, father and brother were all killed. He had fought the British. ** When he came to power, he wanted to prevent another war with Egypt. So, he was willing to talk.

Enter President Nicolae Ceaușescu. A man remembered for being a Communist dictator. It was Ceaușescu who was the go between that Begin chose to open a line of communication with Sadat. Ceaușescu met Begin first, then Sadat. Sadat made clear his desire to talk and the process began, ending in Washington in 1978 with the signing of the Camp David Accords, which remains in place to this day.

Of course, being history that wasn’t the end. Only another beginning. As part of the Treaty Israel had included evacuating Israeli troops from Sinai and removing the 4.500 settlers living there. This latter process created a storm of protest in Israel itself. But it was done. As President Carter says in the documentary in these kind of talks ‘compromise is mandatory’. Something that modern politicians seem to have forgotten, which is a point this documentary makes with its occasional footage of modern Israel.

The Camp David Accords never satisfactorily dealt with the Palestinians living in Israel/the Occupied Territory. It did aim for something called ‘autonomy’, but that was all a little vague. The implication of this though is that it sowed the seed for the Palestinian State. One of the talking heads calls it ‘Palestine’s Independence Day’.

I found this an interesting programme. I’d like to watch the whole series. I’d like to know more about Begin, who seems a fascinating character. One thing I did think is that it seems to me that sometimes the politicians who can make compromises are those who have a track record of being ruthless and hard. Because they are allowed the freedom to do these things that a politician with a lesser reputation wouldn’t be allowed to do it.

Israel and Palestine remain an issue to this day. Whether there will ever be a solution that is fair and just to both sides I don’t know but what this documentary does illustrate is that to get peace one has to make compromises. Imposing a treaty on people is just a temporary solution and there will always be extremists battling to end the possibility of compromise.

I’d be fascinated to see how the event goes on the 10th November at the JW3 Hall in Finchley from 7.30pm. But this is an interesting documentary on a man that I’d like to know more about.

* It should be noted that the Irgun account of what happened at Deir Yassin differs from the Palestinian one.

** It is always a salutary lesson as an Englishman to remember that, to a lot of countries, we are the evil Empire.

The UK Jewish Film Festival is on until November 21st. Find out more about what's on and book tickets HERE.