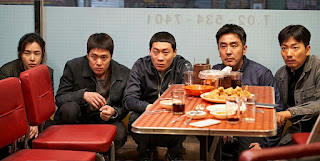 Written and directed by Lee Byeong-heon, Extreme Job is a film that, if it were in English or American, I suspect it would be a massive hit, but because it is a Korean film not enough people will get to see and enjoy it, which is a shame. Made for about $5m it has gone on to gross about $100m, which makes it one of South Korea’s most profitable films ever.

Directed with dashing brilliance by Lee Byeong-heon – one might even say ‘with panache’ - it is a comedy-thriller about a bunch of apparently useless cops led by Captain Ko (Seung ryong-Ryu). The film begins with their inept attempt to arrest a middle level drug dealer. The resultant cock-up leads to the squad being given a final chance to put things right, which leads to them running a restaurant, which turns into a massive success, which…[Skip to the End] ends with a massive punch-up and one of cinema’s more hilarious snogs. That might be a spoiler. If it is, I apologise.

Seung ryong-Ryu is superb. A Captain whose colleagues are doing better than him because his squad looks useless. Each member of the squad gets their moment to shine, but the performances are excellent throughout. I particularly liked Lee Hanee as Detective Jang, the female member of the squad and Gong Myung as Detective Jae-Hoon, who gets some brilliant moments towards the end of film in particular. But the stand-out for me was Jin Seon-Kyu as Detective Ma who manages to be funny and a little scary at the same time, which is a tough combination.

There’s a delicious deadpan quality to a lot of the humour. Something I adore in general. However, I think the film's key strength is that it manages to take a number of the cop genre’s tropes – the tough Captain back at HQ, the Detectives marital and family difficulties, the stake-out, the raid and the chase - and do something interesting with even the most cliched of them. It’s not without moments of real violence either, which means it manages to work both as a comedy and a thriller. The main villain and his coldly violent female sidekick, played by Shin Ha-kyun with charismatic menace and – I think – by Jang Jin-Hee*, are suitable threatening.

I think the key to its success though is that all the main characters feel like they’re a likeable bunch, even at their most useless. There’s something lovely about the way they interact and how they react to their changing situation. It will turn out that they all have hidden talents, but Detective Ma gets to show off more than one.

There’s a touch of the Quentin Tarantino or Guy Ritchie about some of his choices. Indeed, if I was to compare this to any film – apart from its nod (deliberate or not) to Woody Allen’s ‘Small Time Crooks’ – it is ‘Lock, Stock and Two Smoking Barrels’, but with cops instead of crooks.

Apparently ‘Extreme Job’ has been such a success that there is talk of a Hollywood remake starring Kevin Hart. I hope that never happens. In a just and righteous world someone would turn this, the original, into a worldwide success. But the Anglophone world is nothing but against the whole subtitle’s thing (and dubbing films is an abomination in my not very humble opinion).

Hopefully though some can persuade a Netflix or an Amazon Prime to put it up on their UK or US sites and that word of mouth can give it the push it so deserves. If you get a chance, go and see it. It’s a good way to spend 110 minutes. Trust me. Or Not.

* On a minor point I’m sure professional film critics have their ways of making notes of who is playing who in films they are reviewing but I don’t, so it is always a little annoying to discover how bad the English language information is on films like this.

Extreme Job is touring to Nottingham and Belfast - visit the website for more details.