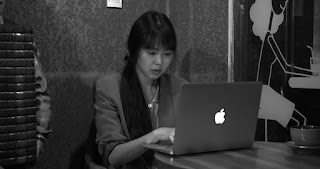 Grass is an odd film. As I was leaving the Regent Street Cinema after watching it, I overheard two different people say, ‘I didn’t hate it, but…’ Which seemed a reasonable response to it.

Directed by Hong Sangsoo, it feels unusually artificial and theatrical. You could be watching a play, which, for a film where many of the characters in it are actors, writers or both seems natural. It’s also filmed in black and white – which made me think of Mark Jenkin’s Bait, which also had an oddly artificial feel to it. And like Bait the performances are naturalistic, it gives the events in both films a certain dreamlike quality.

There’s also something a little Pinteresque about the whole thing. With its awkward conversations between couples during which not much is said on the surface but underneath all sorts of unspoken things are going on. And with its almost ruthless determination to explain nothing. This is a plotless film.

When the film ended, the final sequences do make you wonder if you’ve popped into someone’s daydream and now they’ve woken up we realise that the café is empty.

Hang Sangsoo has presented you with a series of conversations which we eavesdrop on along with A-reum. But we also get to eavesdrop on the eavesdropper when we see A-reum at dinner with her brother and his girlfriend, which is one of the funniest scenes in the film.

It’s only 66 minutes long, perhaps even less. Nothing much happens. Different characters come and go in a café. It’s a strange place. Tucked down a back alley, it’s never seen owner playing classical music and allowing his customer the freedom to drink alcohol late into the evening.

We start with a couple having an awkward meeting, that develops into an argument about how they are responding to the death of another person. Then we realise that all of this is being overheard by A-reum (Kim Minhee), who is writing a ‘sort of diary, but not a diary’. She comments on what she sees. One of the couple is an actor, played by Ahn Jae-Hong

Then we meet another man, an older actor. He’s played by Jung Jin-young and his character has a slightly creepy vibe about him. Firstly, he asks his friend, a writer, to come away with him for 10 days and help him work on the screenplays he is struggling with. Then he wants to spend days watching everything A-reum does.

But I’m going to end up spelling out the entire story for you, which makes going to see the film a little bit of a waste of time. I enjoyed it, but as the regular reader of my reviews will know I’m a sucker for films where not everything is explained, where things are happening in the silences between sentences.

So, would I recommend it. Yes, I think I would but, in the expectation, that some of you will come to me at a later date and say, ‘What the hell was that about? That’s 66 minutes of my I won’t get back.’ And you might be right but in the scheme of things 66 minutes is a short enough time to take a gamble on. You never know, you might like it.


Grass is touring to Bristol, Glasgow and Edinburgh - visit the website for more details.