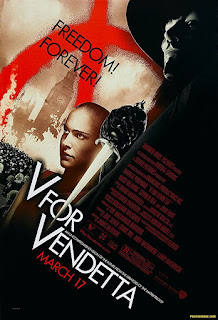 With the film even more relevant than ever, and with the 4K Blu-ray available now, Daniel White rewatched V for Vendetta...


"There is something terribly wrong with this country, isn’t there? Cruelty and injustice, intolerance and oppression. And where once you had the freedom to object, to think and speak as you saw fit, you now have censors and systems of surveillance coercing your conformity and soliciting your submission."

It has become a tradition for me to spend the evening on the 5th of November watching V For Vendetta. I have to admit I am not familiar with its DC Comic roots so I enjoy it for the cinematic feast that it is, but it does mean I don't get bogged down in the whole "it's not as good as the comic" arguments. With Brexit and increasing outrage at the state of Politics in our country I was interested to find out if any of that bled through into this year's viewing. What follows is a review of the film, a loving homage to John Hurt and probably a lot of political ranting which I will attempt to keep on track. It is impossible to ignore the parallels though so I offer no apology. Because, there IS something terribly wrong with our country and, whilst switching off from the deluge of political machinations is a good thing, V For Vendetta thrusts a knife blade right into the bleeding heart of the problem.

One of the first things that strikes me about V For Vendetta is just how good Natalie Portman is in it. I am not a particular fan of Ms Portman and yet, with the right material, she is fantastic, she is perfectly cast as the awakening Evey and her relationship with V is central to the films workability. Evey is the connection between audience and the onscreen events, she represents a populace that has been put to sleep, lulled by a corrupt government and kept docile and in conformity by a state run media service. Portman is strikingly poignant in the scenes when she is locked up and her inner strength and desire to stand against the corrupt British ruling power is as believable as it is inspiring. Bringing a complex character to life, especially one with such a tortuous past, requires perfect casting. The cinema bargain bins are full with films that failed because the casting was flawed (Green Lantern!) but Hugo Weaving (has he ever delivered a bad performance?) IS V, he just is! V has planned his attack on the ruling elite for over 10 years and Weaving delivers a performance that is vibrantly committed but has the weight of the years. To inspire a nation, to awaken a populace from its slumber V has to engage and at the same service as an example so people will follow. I wonder how many takes it took to deliver his V word peppered speech at the beginning but, knowing Weaving, it was probably a one take deal! The tenderness he portrays as he talks to Delia Surridge, having already administered the drugs which will take her life, stand as an effective counterpoint to the violence that V is forced into using. 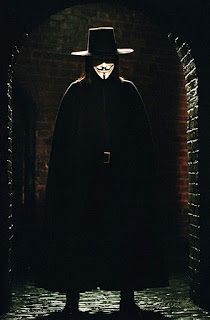 What is striking when you watch V For Vendetta at this time are the similarities between Britain portrayed in the film and the one we live in now. A population fed spin and biased media reporting that seems to favour the ruling party rather than impartially reporting. People that are told what to think and are silenced when they speak out (the worrying use of Social media bullying and intimidation today does little to encourage free speech) The media's state fronted bias is brilliantly portrayed by the rich and corrupt Lewis Prothero (Roger Allam is mesmerising at his scene stealing best) Pushing the ruling line and some dubious business deals have increased his wealth and his  ego to a level which makes Prothero feel he is untouchable. It isn't just the media that needs a serious overhaul as the power hungry Chancellor (John Hurt) has no intention of relinquishing power. Corruption and death is covered up and the people are effectively prisoners in their own homes. The police force (oddly named Fingermen) rule the streets at night and do so at their own whim. With the Police force now run by the corrupt and self serving Peter Creedy (a chillingly sinister Tim Piggott Smith) the people have little hope of change or any sense of the reality that now shrouds the light of truth. Those that stand against the Chancellor disappear and no one is safe from Creedy and his shadowy enforcement officers. This is a Britain that claims to have returned to traditional standards and yet has done so by marginalising those that don't fit in this brave new world. Stephen Fry's character, Gordon Deitrich, is one such ill fitting character and his homosexuality is so outlawed that he lives a life behind a mask. His talk show is widely viewed and yet he is a solitary figure who has grown tired of pretence. His final act of televised defiance leads to his death and at the same time the awakening of Evey.

V For Vendetta screams out the message to us all. A message that pleads with the need for all of us to question and not just to accept what we are told by the media and the government. To awake from the media driven lethargy that is designed to protect the status quo and to resist change that could reduce the fortunes of those who already have too much. The film also demonstrates that when a populace gather together and with one voice demand change, no force is able to resist. There is hope in the darkest of times that a light can be found if it is sought for and that dawn breaks on even the darkest of nights. We live in uncertain times and, whatever side of the Brexit divide you place yourself on, you can be a force for change if you challenge and listen to others. No one is really looking for Parliament to be blown up but perhaps a shake up is needed. I leave you with Evey's final words.

" This country needs more than a building right now, it needs hope"