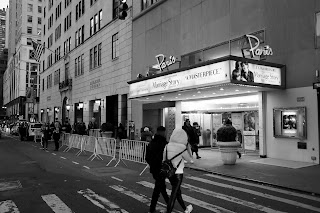 New York’s iconic Paris Theatre is back! Netflix have announced a lease agreement to keep the theater open and save the beloved institution...

The Paris, one of the oldest art houses in the United States, and the last single-screen theater in New York, was shuttered earlier this year and was re-opened earlier this month to a successful run of Marriage Story, by acclaimed New York filmmaker Noah Baumbach. Now Netflix plans to use the theater for special events, screenings, and theatrical releases of its films. Terms of the lease were not disclosed.

“After 71 years, the Paris Theatre has an enduring legacy, and remains the destination for a one-of-a kind movie-going experience,” said Ted Sarandos, Netflix’s Chief Content Officer. “We are incredibly proud to preserve this historic New York institution so it can continue to be a cinematic home for film lovers.”

The Paris Theatre has charmed film aficionados since it first opened in 1948, when actress Marlene Dietrich cut the ribbon to commemorate the occasion. The theater, opened by Pathé Cinema, originally showed French titles, the first of which was La Symphonie Pastorale, which ran for eight months.

The Paris became a symbol of prestige cinema, known for showcasing specialized films, and can be credited with introducing renowned foreign language films to an American audience including Franco Zeffirelli’s Romeo and Juliet, which ran for almost an entire year from 1968-1969; Claude Lelouch’s A Man And A Woman; and Marcello Mastroianni’s comedy Divorce Italian Style, which played for over a year. The theater closed in August 2019 after a successful run of Ron Howard’s Pavarotti.

The film that re-opened the theater earlier this month, Marriage Story, is Noah Baumbach's incisive and compassionate portrait of a marriage breaking up and a family staying together. The film stars Scarlett Johansson and Adam Driver. Laura Dern, Alan Alda, and Ray Liotta co-star.


Tickets for Marriage Story at the Paris Theatre are currently on sale and can be purchased at the box office, or at www.marriagestorymovie.com.