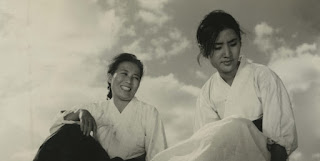 The Seashore Village is a Korean film from 1965, directed by Kim soo-Yong who, aged 90, attended the screening and answered some questions about the film. He was adorably snarky about some of his actors and not at all precious about the process of film-making in general or this film in particular. His view – and I paraphrase here – seemed to be that there was no point telling us what his views on the film were, we should watch the film ourselves and make up our own minds.

It’s a good film. It tells the story of the Seashore Village where most of the men work as fishermen. A dangerous profession then as it is now. Unusually for its time, and for what was then a conservative nation, it tells the story from the point of view of the women of the village.

The focus might be on one woman, Hae-soon (Ko Eun-ah) but this is a story of the women of the village in general. Especially those who have been widowed, which is quite a lot. Hae-soon has only just married at the film’s beginning but she loses her husband to a storm. It looks like then she is doomed to a period of mourning and widowhood. The other widows are sympathetic, especially as she is so young. It’s interesting to see that this is a film that implicitly makes clear that women have sexual needs. There are even some playful hints at lesbianism amongst the older widows.

Which brings us to Sang-soo (Shin Young-kyun) who lives in the village. He’s had his eye of Hae-soon even whilst she was married but her widowhood leads to him making advances on her that are – initially – pretty much attempted rape. Indeed, Hae-soon, is the focus of a couple of scenes where she is either the catalyst for violence amongst men or where she is the victim of an attempted rape. It’s all a little uncomfortable, but it seems to be the fate of a woman in that place at that time.

However, Sang-soo and Hae-soon eventually have a relationship, which her brother-in-law is aware of from the beginning but most of the rest of the village are ignorant of, even though they have their suspicions, because Sang-soo isn’t the most subtle of suitors. It isn’t the done thing for widows to move on so quickly. Eventually though Sang-soo, like a lot of men, blabs to his mates in the pub what he’s done. This infuriates her brother-in-law, who after smacking Sang-soo about a bit basically says, ‘Take her away from the village and marry her. I’ll clear it with Mum.’

That done, they leave and the rest of the film tells the story of their life before Hae-soon is forced to return to the village. When she comes back, she is welcomed by the other women with open arms and it ends with her being taken back to her mother-in-law, played rather wonderfully by Hwang Jung-suen.

The Sang-soo and Hae-soon story is the film's focus and it takes us from the ocean to the mountains and back again. But there are other stories told here, some more tragic than others as one of those women who lost her husbands goes mad. There’s something of Ophelia about that story, although whether that is intentional or not, I don’t know. Perhaps I should have asked at the Q&A.

Hae-soon’s losses have been terrible but her return to the village, the camaraderie of her fellow widows and the love of her in-laws in the end make it seems like an optimistic film. There is hope.

The performances are great, particularly Ko Eun-ah as Hae-soon and Hwang Jung-suen. Yes, there are moments that feel a little awkward and uncomfortable especially when Sang-soo begins his ‘direct’ attempts on Hae-soon’s virtue but it feels ahead of its time in the way it makes women, and how women live together, the centre of the film.

I should note that this was the Opening Gala of the London Korean Film Festival at the Regent Street Cinema (which has become one of my favourite places to watch films in London) and that there were some speeches beforehand. It also marks the centenary of Korean cinema and films from the archive make up a large part of this years Festival. As was pointed out in the introduction although the first Korean film was made in 1919 hardly anything survives because of the horrific damage done during the Korean War. The Sixties, it seems, were a Golden Age for Korean Cinema and this was a fine film to begin the Festival with.

Director Kim Soo-yong, directed his first film in 1958 and his last in 2000. In total he’s directed 109 films. It was a honour to have him attend the Festival and, despite the organisers moving part of the Q&A to before the film, he stayed through to the end and then answered some more questions, although as I said he’s pretty blasé about the whole thing as I suspect any 90 year old would be but it was worth listening to him. At one point he said, ‘I’m a film director so the only thing I know how to do is talk in an entertaining way.’ I’m going to take that to mean ‘I know how to tell a story in an entertaining way’ and so he does.

The London Korean Film Festival runs until 14th November in London before touring select cinemas throughout the UK. Find out more and how to book tickets HERE.