Film - The State Against Mandela and the Others 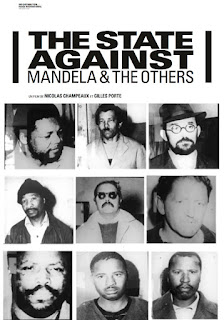 Tony Cross watched The State Against Mandela and the Others at the UK Jewish Film Festival...

This is a fine documentary, directed by Nicolas Champeux and Gilles Porte.

It tells the story of the Rivonia Trial, when Nelson Mandela and nine others where tried by the apartheid South African state for various crimes for which they were all expected to be sentenced to death.

It was during the Rivonia Trial that Nelson Mandela made the speech that you may be familiar with that ends with:

“During my lifetime I have dedicated my life to this struggle of the African people. I have fought against white domination, and I have fought against black domination. I have cherished the ideal of a democratic and free society in which all persons will live together in harmony and with equal opportunities. It is an ideal for which I hope to live for and to see realised. But, my Lord, if it needs be, it is an ideal for which I am prepared to die.”

Indeed, the only time we really hear Mandela in this film is when they play large chunks of the speech. It is a speech worth hearing, and Mandela was to repeat the section above upon his release.

However, this film is mainly about the other men on trial. Mandela’s story has been told often, including by himself. It will be told again. But here we hear from Denis Goldberg, Ahmed Kathrada, Max Sisulu’s, who is Walter Sisulu’s son, Andrew Mlangeni and Winnie Mandela. We also hear from Joel Joffee and George Bizos, who were lawyers for the defence and David Yutar, who was the son of the prosecutor, Percy Yutar.

What this does do is make the importance of Walter Sisulu clear. He is often in the shadow of Nelson Mandela but was as important to the struggle against apartheid. He was the ‘wise man’ who Mandela ran everything – or pretty much everything past. His son Max’s pride in his father is one of the things that comes through in the film. 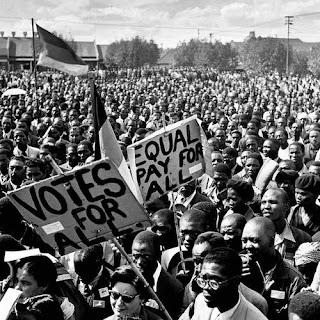 No film footage exists of the trial but there are over 250 hours of audio, including Mandela’s speech. The filmmakers use that audio and use animation to dramatize the process. The animation is excellent, but in a documentary that in all other ways is a pretty straight down the line combination of archive footage and talking heads it gives the film a slightly artificial quality. That artificiality though does nothing to dampen the power of some of the trial. The clash between Sisulu and Percy Yutar is incredibly powerful.

The defendants did a fine job of calmly putting their case across and placing the actions of apartheid South Africa at the centre of their case. We talk glibly sometimes about terrorism – or armed struggle if you like – as being inexcusable but if, as in South Africa after Sharpeville your government has basically made clear that there is no peaceful means to achieve your goals then what choice do you have but sabotage or guerrilla warfare. The defendants claimed that by their choice of targets they tried to avoid bloodshed, but that they were aware that bloodshed was a possibility. Armed struggle – or terrorism if you like – is sometimes the only thing that will get the state’s attention and in South Africa, where the white population was in a minority, the fear of a black uprising dominated their thinking.

When the trial ended the accused were not sentenced to death and the one gap in this film is, we never hear from anyone about why Quartus de Wet, the judge, made that decision. It is hinted that a combination of international pressure and internal fears that their execution might lead to an uprising were the reasons, but we don’t hear about that in detail. I’d like to have done.

We do hear from the defendant’s family members, Ahmed Kathrada’s white girlfriend and David Yutar. It helps make you realise the impact that the trial and struggle had on their families.

Yutar’s point about his father, a religious Jew, being used by the South African authorities to show the world that they could possibly be racists because, if they were, why would they employ a Jew in such an important role is a good one and he seems slightly frustrated that his father would put his career ambitions above his religious beliefs to accept the role.

It would be 27 years later that Mandela would be released and a peaceful transition to real democracy would begin. The film ends not with Mandela’s release but with a gathering of some of the defendants and their lawyers gathered together for a drink. As they talk, we see Donald Trump being sworn in as President of the United States, which is a subtle reminder that white supremacy isn’t something from the past it is still here.

People left the screening I was at. I’ve no idea why. Was it boredom? Was it a dislike of the content? Or were they just not feeling well. I can’t tell you.

I do know that I enjoyed it. In fact I suspect it was the sort of film I needed as the current political situation has drained me of my usual optimism. What this film gave me was hope and a realisation that history is our side. Not theirs. That, to quote Gandhi, “When I despair, I remember that all through history the way of truth and love have always won. There have been tyrants and murderers, and for a time, they can seem invincible, but in the end, they always fall. Think of it—always.”