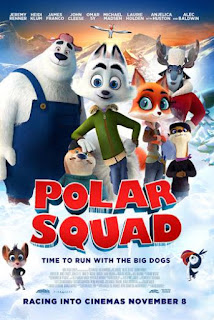 Steve Taylor-Bryant is going to the dogs... the Arctic Dogs that is. So did Polar Squad get a frosty reception or did Jeremy Renner sleigh him...


Swifty the Arctic Fox (Jeremy Renner) works in the mailroom of the Arctic Blast Delivery Service, but he has much bigger dreams. He yearns to become a Top Dog, the Arctic's star husky couriers. To prove he can do it, he commandeers one of the sleds and delivers a mysterious package to a secret location. Once there, he stumbles on a hidden fortress overseen by the nefarious Otto Von Walrus (John Cleese). The blubbery evil genius commands an army of oddly polite puffin henchmen. Swifty discovers Otto Von Walrus' villainous plan to drill beneath the snow-packed surface to unleash masses of ancient gas to melt the Arctic and become the world's supreme ruler. To stop this sinister scheme, Swifty enlists the help of his friends: PB (Alec Baldwin), a neurotic polar bear, Lemmy (James Franco), a scatterbrained albatross, Jade Fox (Heidi Klum), a brainy engineer, Leopold (Omar Sy) and Bertha (Heidi Klum), two conspiracy theorist otters and Magda (Anjelica Huston), his curmudgeonly boss.

It's not often that I get sent a screener for review that I can actually watch with my children about. Most stuff I am sent is more adult in nature, and concentration is difficult for me at the best times let alone when surrounded by all my ‘good ideas at the time’. But this time, I got sent an animated feature! This never happens, most PR companies are aware that I have no capacity for fun, or cartoons, or fun cartoons [or people – Ed] however I am a professi… a person who does do writing about da movies, so I sat my kids down, allowed them near me, and pressed play.

Polar Squad (or Artic Dogs in some regions) is a big voice animation extravaganza. For a film set in the arctic it warmed my heart and I laughed along with the kids, my kids are alright you know, I may spend time with them again. The youngest giggled throughout at the Jeremy Renner voiced Swifty, the Arctic Fox that wanted to be as good as the huskies but wasn’t, the next one up in age played the ‘lets guess whose voice this is’ game and I’ll admit that it was fun, considering the voices involved.

Polar Squad is not one of the ‘Big’ releases from Pixar or another huge conglomerate, it’s the animation equivalent of an indie film or small studio production but I think that is half the appeal. It isn’t made to sell toys, or flog you a karaoke version of the soundtrack, it is just good storytelling, fantastic animation, and a cast having fun, like films used to be in the olden days.

It gave me a couple hours of enjoyment with the kids where I got to forget that the world is burning for a while, and my kids didn’t get withdrawal symptoms from YouTube once. It was a family occasion, it was so much fun, and Jeremy Renner is still at the top of my list for actors who sing proper, the guy has skills.