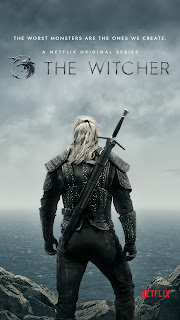 The worst monsters are the ones we create apparently, but the best trailer yesterday came from Netflix and The Witcher...

Based on the best-selling fantasy series, The Witcher is an epic tale of fate and family. Geralt of Rivia, a solitary monster hunter, struggles to find his place in a world where people often prove more wicked than beasts. But when destiny hurtles him toward a powerful sorceress, and a young princess with a dangerous secret, the three must learn to navigate the increasingly volatile Continent together.

Henry Cavill leads the cast of ​The Witcher saga, playing the role of Geralt of Rivia, alongside other main cast members, Anya Chalotra as Yennefer and Freya Allan as Ciri. Other previously announced cast include ​Jodhi May as Calanthe,​ Björn H​lynur Haraldsson as Eist, ​Adam Levy as Mousesack, MyAnna Buring as ​Tissaia, ​Mimi Ndiweni as Fringilla, Therica Wilson-Read as Sabrina, Emma Appleton as Renfri, Eamon Farren as Cahir, Joey Batey as Jaskier, Lars Mikkelsen as Stregobor, Royce Pierreson as Istredd, Maciej Musiał ​as Sir Lazlo, ​Wilson Radjou-Pujalte as Dara, ​and Anna Shaffer as Triss.

Showrunner Lauren Schmidt Hissrich confirmed at Lucca Comics and Games convention in Lucca, Italy that all eight episodes of the series will debut on Netflix globally on 20th December 2019.