Audiobook - The Pit and The Pendulum and Other Macabre Tales 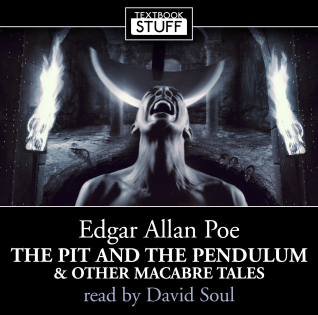 Since it's Hallowe'en, here's a reminder of Susan Omand's thoughts from a few years ago on an audio collection of Edgar Allen Poe's greatest works thanks to Spokenworld Audio...

I have known of Poe's work for a long time but never actually encountered that much of it, so it was refreshing to be given the chance to explore a variety of tales all at once. There are five stories (and three pieces of music but we will get to those later) in this audio book and I will deal with each separately.

The Pit And The Pendulum is the first, and longest, story in the collection. It is a first-person story of a man's trial for an undisclosed crime and his subsequent tortuous imprisonment in a place of complete darkness and solitude. He tries to get some bearings by feeling his way around the walls of his prison but faints from anxiety before he makes it all the way round. When he awakes he finds slight illumination, food and water, which he has to share with the rats he can now see. The rats, the giant hole in the floor and the swinging scythe-like pendulum.

This is psychological horror in extremis. The story plays on all your fears at once without once being graphic or gore-ridden. Because of this there is not much "going on" in the text, it is all in your head as you involuntarily trade places with this prisoner through the power of descriptive writing.

The Masque Of The Red Death is a tale of a prince, Prospero, whose country is overtaken by a fatal plague known as The Red Death which decimates the population in a most graphic way. To protect himself and a thousand of his courtiers, they retreat to the fortress-like abbey where they remain with food, wine and entertainment as the plague rages outside the abbey walls. After 6 months of this self-imposed incarceration, the Prince holds a masked ball spread over seven rooms within the abbey.

Each room is decorated in a different colour from the blue room in the East, where the Prince himself sits, through purple, green, orange, white, and violet. The last room is decorated in black and is illuminated by a scarlet light, "a deep blood color" and few venture in. There is an ebony clock in this room whose hourly chime silences everyone at the ball for the duration and, at the stroke of midnight, an unknown masked figure, dressed in a blood-spattered cloak comes out of the black room.

This can be read as an allegorical tale, of the persistence and inevitability of death, with the symbolic room colours, of which much was made in the story, being each stage of life as one passes through them. Or it can be read more simply as a descriptive tale. I won't spoil the story for you but felt that the last little bit, which took the form of an explanation of some of the story, really let it down. We should have been left wondering.

The Tell-Tale Heart is a first-person narrative from a man trying to convince us of his sanity while still confessing to the murder and dismemberment of an old man. His reasons, he stipulated, were not for money or for revenge or hatred but because of the old man's "vulture like" pale filmy blue eye, which haunted him and eventually drove him to murder. The story recounts how, over the course of a week, our narrator quietly slipped into the room where the old man slept every night at midnight, but could not bring himself to commit the murder because "the Evil Eye" was shut. On the eighth night the old man awakened.

There is a real sense of tension in this story as the narrator describes the slowness and deliberateness with which he waits for the right moment. Then there is a frenzy as the deed is done and a chilling matter-of-factness about his explanation of how and why that does indeed hint at the madness welling within. The eventual end of this short tale is so full of the paranoia which drove the narrator to murder in the first place, that you can almost feel the psychotic break as it happens.

The Facts In The Case Of M. Valdemar is a first-person tale from a man who wanted to conduct an experiment. With a strong interest in mesmerism, or hypnosis, he was intrigued to discover what would happen if a subject was mesmerised just at the point of death - whether the subject actually could be hypnotised and whether death itself could be held in suspension. He found a willing subject in his friend, the M Valdemar of the title, who was dying of a form of tuberculosis. Our narrator was summoned to M Valdemar's deathbed at the appointed hour and proceeded to induce hypnosis with very surprising results.

I was utterly fascinated by this tale but then I have a morbid fascination with the science of death and the function of the brain and it was the scientific approach, the almost documentary style, which made it totally believable. There's not really much more to add to this, as the story was like a report of experimental findings which I found incredibly interesting but other people would be squeamish or put off by - much in the way of looking at scientific specimens in jars. Maybe I'm just weird.

Hop-Frog is the name of the court jester in this final tale of the King who enjoyed a practical joke. Not the jester's real name of course, but the name bestowed cruelly upon the fool by ministers of the court because of his size and stature "being also a dwarf and a cripple". Because of his leg deformity, Hop-Frog could not move easily across the floor but his arm-strength meant that he was easily able to climb ropes. His friend, Trippetta, also small but beautiful and a graceful dancer, had influence over the King and his courtiers and used it to Hop-Frog's advantage as much as she could. One fete day, the King decides to make Hop-frog drunk, not a good idea, and Trippetta implores them to stop, to be rewarded by a glass of wine thrown in her face by one of the courtiers. This annoys Hop-Frog so much that he comes up with a vicious plan to exact revenge. The rest of the story tells of how he gets the King and his courtiers to dress as orangutans at the next feast day to "scare the women" by covering themselves in tar and flax and chaining themselves together. The chandelier in the hall is removed "for safety". It was all fun and games when the orangutans appeared at midnight on the feast day until Hop-Frog grabs a lighted torch and the chandelier hook.

This was by far the most distasteful of the tales in this collection for many reasons. While the physical violence was graphic, it is the bullying, the mental violence from both sides in this story, that made it horrific in ways maybe not initially intended. I cannot feel pity, or justification, for one side or the other - it is just a thoroughly dislikable story.

I said at the start that there were also 3 musical tracks on the audio. I'm not entirely sure why they were there as they felt like filler of a kind that, if you are of a certain age, you will remember adding tracks to the end of an album you taped just so you don't have to rewind it. They didn't seem to fit with any of the stories, whether or not they were meant to, and just appeared superfluous although not unpleasant.

So this is a huge variety of Poe's work all in one collection, from the highly fascinating to the utterly abhorrent. I must make mention of the production of the audio book. The choice of voice - David Soul - was perfect. From the Latin incantation at the start of The Pit and the Pendulum to the gruesome (to some) end of M Valdemar, I was enrapt. I am, however, going to skip over the Hop-Frog story in future because not even the mellifluous tones of David Soul could redeem that in any way, shape or form.

The Pit And The Pendulum and other Macabre Tales available from Spokenworld Audio.
Email ThisBlogThis!Share to TwitterShare to Facebook