Bests of the Decade - Comic/Graphic Novel

Because we reckon you’ll not have had enough of voting for things yet, every day between now and Christmas Eve we’re giving you the chance to vote for The DreamCage Bests of the Decade. Today’s category is Comics/Graphic Novels...

If you'd told me ten years ago that I'd be reading more comics than I'd ever done in my life I wouldn't have believed you.  Back then, in the UK, there were "the big two" of Marvel and DC, both on the rise again then because of Batman and the X-Men films, which sometimes made it into mainstream newsagents alongside the Dandy and the Beano and, if you were lucky, Commando and 2000AD, but that was really it. Unless you lived in one of the big cities where you could find a Forbidden Planet, comic shops were pretty few and far between and, at best, you'd get a very dodgy comic fair, comprising tables filled with blokes digging through cardboard boxes, visiting the local town hall once or twice a year. That has all changed now.

The shift can be attributed to a couple of things; firstly the changes in technology, which have affected both the production and consumption of comics. Graphics and publishing software on PCs is at a stage now where it is much easier for comics creators to make comics themselves rather than either pitching ideas to big publishers, or producing low quality zines on black and white photocopiers. Social media and the miracle that is crowdfunding has meant it is a lot easier to finance production, meaning writers and artists can get paid for their work, and to get small press/self published comics out to a waiting market. And the other huge shift in technology in the last 10 years is the rise of the digital comic, with audiences now eager to read their comics on their screens because it means getting a comics fix quicker, cheaper and more easily than the paper counterparts. This has been helped a lot by the innovation of subscription services like the Comichaus app, which is fast becoming the Netflix of comics, allowing access to huge numbers of digital comics for a single monthly subscription.

The second thing that has happened over the last 10 years is that comics and graphic novels have become "acceptable" for mainstream consumption and this is, I think, thanks to the cinema for introducing a whole new generation to a large variety of comics characters. For example, ten years ago you wouldn't have found one shelf, never mind a whole section, of graphic novels in Waterstones, but now comics creators are on best seller lists and gracing the stages of book festivals across the country. Ten years ago, you wouldn't have found many, if any, shows on TV based on comic book characters but now you have loads coming over from the US, made popular thanks to streaming services - think Arrow-verse, Marvel, Preacher, Lucifer, iZombie, The Walking Dead, Gotham, Smallville etc etc etc, the list is almost endless. And ten years ago, you would absolutely not have gone to a comic-con as a family day out, never mind actually expecting to see any comics creators there.

But the best thing about both of these things is that comics on every subject, by indie creators as well as by big publishing houses, are now readily available for everybody to enjoy. Comics are not just for kids, they're not just made for (or by) blokes of a certain age any more and they're NOT all about caped-crusading superheroes!

Our main four recommendations are below as always but other great suggestions from the team included The Boys, a story of corrupted superheroes written by Garth Ennis and co-created, designed, and illustrated by Darick Robertson, or you could try Y: The Last Man, by Brian K. Vaughan and Pia Guerra detailing a post-apocalyptic world all but two living mammals with a Y chromosome, males, have been wiped out. For something quite epic, the team suggested My Favorite Thing Is Monsters, the 700 page debut graphic novel of Emil Ferris, which portrays a young girl named Karen Reyes investigating the death of her neighbour in 1960s Chicago or there's Mary and Bryan Talbot's The Red Virgin & The Vision of Utopia, a historical story which chronicles the incredible and outrageous life of Louise Michel, the revolutionary feminist dubbed “The Red Virgin of Montmartre”.


Here are our four nominations, in no particular order. Bear in mind that we couldn’t watch/read/play everything that came out in the last ten years, so your own personal favourites may not be here, but these are some of ours…

"SEX, SUPERPOWERS AND SIX MONTHS TO LIVE! Verity: frustrated artist. Weasel: struggling guitarist. Monty: rogue media icon. Three people infected with the G+ virus, which grants them incredible powers – but which will kill them in six months! Will they fade away – or go out in a blaze of glory? From the streets of London to the North Atlantic, from muses lost to futures thrown away – Death Sentence is the jaw-dropping next step in superpowered storytelling" 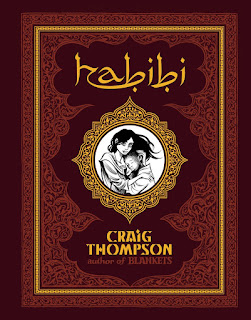 "Habibi, based on a Middle Eastern fable, tells the story of Dodola, who escapes being sold into slavery and rescues an abandoned baby she names Zam. They live in isolation in an old boat in the desert. As they age their relationship shifts from mother and son, to brother and sister and eventually lovers. In the meantime however Dodola is forced to prostitute herself to desert traders in order to provide for Zam. When he seeks an alternative means of income Dodola is captured by the Sultan and Zam is forced into a quest to try and rescue her."

"Something horrible is afoot in the sleepy fishing town of Charlsberg. Disappearances, strange lights and the town's slow death all point to otherworldly goings on... Enter fisherman, mystic and all round spectral asskicker, Griff Gristle. Aided by Justine, the sister of one of the missing, Griff must track down the source of these disappearances and finds a lot more than he could ever have bargained for. " 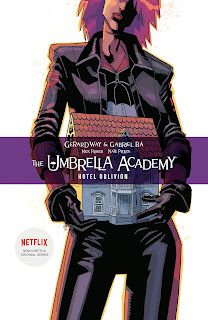 "the best-selling graphic novels return - with the original creators Gerard Way (My Chemical Romance, Doom Patrol) and Gabriel Ba (Two Brothers, Casanova) have earned awards and accolades on their separate projects, and finally return to their breakout 2007 hit, for the latest chapter in the bizarre lives of their former teen superhero team. Faced with an increasing number of lunatics with superpowers eager to fight his own wunderkind brood, Sir Reginald Hargreeves developed the ultimate solution... Now, just a few years after Hargreeves's death, his Umbrella Academy is scattered. Number Five is a hired gun, Kraken is stalking big game, Rumor is dealing with the wreckage of her marriage, an out-of-shape Spaceboy runs around the streets of Tokyo, Vanya continues her physical therapy after being shot in the head - and no one wants to even talk about what Séance is up to... The award-winning and best-selling superhero series returns, stranger than ever - And their past is coming back to hunt them."

Here's today's POLL to find The DreamCage BESTS of the DECADE and today it's #comics and #graphicnovels - here's the list: the Death Sentence comics of @montynero; Habibi by Craig Thompson; the Griff Gristle comics from @madiuscomics or @gerardway's latest Umbrella Academy?
— The DreamCage (@TheDreamCage) December 18, 2019

So, which will it be? There are polls running today on our Twitter page for you to vote for your favourite from the final four listed above (no prizes, it’s just for fun). Also, the polls will change every day so be quick if you want to vote in this one! The winners, as decided by you, of all nine categories will be listed on The DreamCage website in a special article on Christmas Eve when we announce The DreamCage Bests of the Decade!