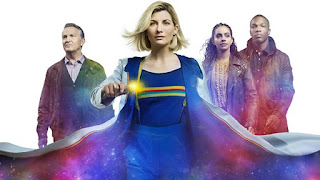 Stephen Fry takes centre stage in this first look trailer of Spyfall, the two-part opening story of the new Doctor Who series...

Speaking at the time his guest role was announced, Stephen Fry said “Short of being picked for a British space exploration programme and I readily concede that I’m past the age where I’d be considered (if I was ever the right age for such a posting) - then being in an episode of Doctor Who will certainly do as a very sweet second-place excitement.”

Anyway, here's the trailer, with Stephen Fry being very Stephen Fry-ish which gives us all something to look forward to (maybe?) in the story which was written by showrunner Chris (#blameiton) Chibnall, who said at a recent round-table event “It’s big, the first episode. It’s the biggest episode we’ve done. It might be the biggest episode the show has done. Lots of action, lots of fun.”

More star turns are predicted throughout the series which materialises at 18:55 GMT on BBC One on 1st January followed by episode 2 on Sunday 5th January, with confirmation that the series will run through until mid March, but there will also be a "special episode" after the end of the 10 episode run... next year's Christmas special maybe?