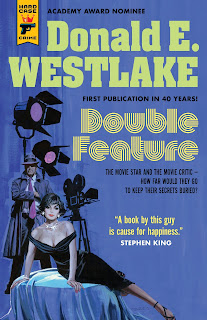 Called “one of the great writers of the 20th Century” by Newsweek and an Academy Award nominee for the screenplay of the classic noir film The Grifters,  Donald E Westlake's Double Feature boasts a pair of novellas exploring the intersection between mystery and the movies, both of which have been made into films, one starring Jack Ryan’s Marie-Josee Croze, the other starring Fargo’s William H. Macy and Desperate Housewives’ Felicity Huffman.

Originally published under a different name more than 40 years ago, the book hasn’t been available in any form for decades.

In New York City, a movie critic has just murdered his girlfriend—well, one of his girlfriends (not to be confused with his wife). Will the unlikely crime-solving partnership he forms with the investigating police detective keep him from the film noir ending he deserves?

On the opposite coast, movie star Dawn Devayne—the hottest It Girl in Hollywood—gets a visit from a Navy sailor who says he knew her when she was just ordinary Estelle Anlic of San Diego. Now she’s a big star who’s put her past behind her. But secrets have a way of not staying buried...

“These two short novels, one hilarious and one heartbreaking, are two of the best works Westlake ever wrote,” said Hard Case Crime founder and editor Charles Ardai. “There is no better way for a new reader to encounter Westlake, or for a longtime fan to discover something new from the master.”