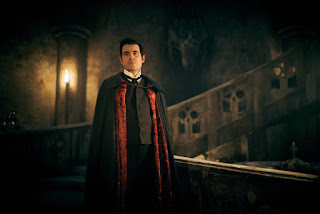 Daniel White has a go at Gatiss and a rant about retcon after watching Dracula...

Before I get into the actual review element of this article, I want to share something that has bothered me for some time. It concerns Mark Gatiss and sadly I fear there is little that can be done about it. Gatiss has, for some time, been going through somewhat of a regeneration of his own and he has now truly completed his transformative process. Gatiss, writer and co-conspirator with The Moff has become Wally (of Where's Wally fame.) The man is everywhere and is especially virulent at Christmas, he just can’t help himself and everything he writes gives him more opportunity for infecting our screens with his annoying smug face. He popped up in Dracula as a particularly odious weaselly lawyer (not so much acting as playing himself) and why on earth was there so much Mycroft in Sherlock? Oh, that's right, he co-wrote it. I now believe it is impossible for Wally to write anything without maximising his opportunity to smarm all over the screen and it really, really gets on my nerves.

So, we turn our attention to the latest adaptation of Dracula, something I approached with a mixture of emotions. Whilst not a Stoker purist (dramatic licence is a thing you know Stokerites) I do respect the late great (Count) Christopher Lee in refusing to utter a single word unless Dracula was uttering Stoker's written phrases. I am also a very very large Sherlock fan and thoroughly enjoyed Moffat and Wally's adaptations of Baker Street's finest detective exploits. The modern uplift didn't remove Sherlock's brilliance, it seems to underline it and Cumberbatch's performance was astonishing in all its sociopathic beauty. Apparently Moffat and Gatiss (I can’t keep calling him Wally) have spent the last 3 years researching Dracula and vampiric lore, so I was expecting something new but respectful to both the original Stoker novel and vampiric canon. I think that's actually a point I want to return back to later but new takes on well-known stories aren't always a bad thing as long as they are well thought through and don't malign what has been done before.

The new BBC and Netflix series of Dracula was broadcast over 3 nights and with each episode lasting 90 minutes it felt like a typical Sherlock series. From the start of Episode 1 I was completely enthralled as the period detail and atmosphere was absolutely fantastic. You could almost feel the Victorian smog leak from the television. At its best, period drama transports you back in time and embroils you in the very story in a way that it a delight to experience. What is striking from the start is the use of a narrative back story which tells the events that transpire between the doomed Jonathan Harker and Count Dracula as a sort of written testimony. What is particularly inspired about this is Harker is already a member of the undead and is telling his story to Nun other (sorry) than Agatha Van Helsing. Both John Hefferman and Dolly Wells are stupendously good in their roles and Wells brings a new dimension to the character of Van Helsing. She struggles with belief and faith and yet, as a result of the very evil she has been fighting all her life, she has dedicated her life to understanding and defeating all manner of monsters that exist beyond the perception of humanity. Personally, I despise pointless and unexplained gender changing of characters when the only reason is to assuage the loud and angry outcries against male dominated casting. Don't get me wrong, in no way am I sexist, but I have always believed that we do not tip the scales away from misogyny by simply regenderising a particular character. Had Agatha just been a female version of Van Helsing, as portrayed in the past, this would have felt like a tired and probably inferior modern politically correct take on Dracula. But. BUT Agatha is so much more than a copy. Because she doesn't just want to destroy Dracula but understand him, her approach is deeply cerebral in nature but utterly, utterly fearless. Right from the outset it is clear that this is no typical retelling of the Dracula legend and yet it still retains a beautifully familiar feel. 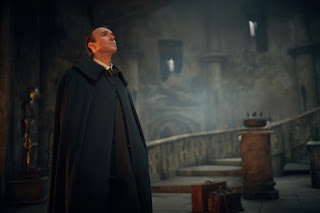 Harker's stay at the Count's Castle has always been one of the most nightmarish elements to Stoker's story in that it combines a horrific supernatural element with an overwhelming feeling of claustrophobic despair. The sheer labyrinthine scale of the castle in this version, when added to the malevolence that exudes from every pore of the Count's skin, is almost unbearable to endure. When Harker meets the undead there is no seduction but, in its place, pure undiluted horror. The decision to use a stop frame "Evil Dead" effect as they move towards Harker is the stuff of nightmares and it is clear that Harker will never leave the Castle alive. Claes Bang's portrayal of Count Dracula is so singularly effective it achieves something I never thought possible in that it adds new layers to the character. The assured, seductive and powerful Count is also given a sense of cold steely determination and a level of manipulation that extends further than normal. In Episode 2 we discover that he has manipulated everyone on the ship carrying him to England simply so he can sample different flavours of humanity.

Blood also takes on a new importance over and above its ability to sustain the Count. "Blood is lives" means both that it gives life and also passes on the life experience and knowledge of its victims to Dracula. It isn't just the purpose of blood drinking that is given a new meaning as Moffat and Gattis also attempt to explain some of Dracula's vulnerabilities. It is here that the weaknesses in the writers’ approach are apparent. Dracula himself suggests that his aversion to the cross is, since he has drained so many peasants, he has also infected himself with their hatred of religion. The belief that, rather than providing support and benefit to their lives, religion and the cross has enslaved and pushed the normal working man further into poverty is a strong idea and one shared still today. Although Agatha dismisses this explanation as logical and yet flawed, her suggestion that Dracula doesn't actually know why he hates the cross seems rather empty as a plot development. Indeed, as the 3 episodes progress, we learn that ALL of Dracula's weaknesses are, in fact, only a reality because Dracula has somehow accepted vampiric stories as fact. With the end of the series culminating in Agatha demonstrating to him that sunlight doesn't actually kill him and that he is doomed to walk the earth for all eternity, hopeless and soulless is one of the most disappointing and lazy pieces of writing I have ever endured. Seemingly the only weakness that is true is that a vampire cannot drink the blood of the dead. Why this is true, and all the other rules are not, is never explained and yet we are supposed to just accept that this monumental change from everything that has gone before to be the way things are is simply not good enough. Moffat and Gatiss have spent 3 years researching the character and nature of Dracula and vampiric fiction only to craft a story that effectively rewrites all that has gone before.

The first 2 episodes of Dracula are periodic drama at its absolute finest. With the second episode entirely focused on Dracula's journey to England it's a kinda who done it which turns into hunt the vampire. There are still elements which are incredibly annoying and they are entirely the fault of Moffat and Gatiss. Perhaps drunk on their own success, it is almost certainly the case that Moffat has become bloated by his own ego and his writing has always felt like an opportunity for him to leave his mark on whatever he is working on. Doctor Who suffered greatly as a result of his insistence in retconning elements of the show’s history and his obsession with Clara 'the impossible girl' Oswald led to a show that was greatly weakened by the time he left. It seems he still hasn't finished as the reference to Clara as the barmaid in Dracula is a tiresome fan flick which is both lazy and irritating. It also led to an equally annoying outburst on Social Media when Sacha Dhawan made an appearance as a passenger on the boat. No, Whovians it doesn't mean the Master is onboard! Sacha is an actor playing a part! By the end of Episode 2 my fear that Dracula was going to be overbalanced by Moffat and Gatiss bloated desire for self-importance and that I had wasted 3 hours of my life was so intense and yet it seemed inevitable. 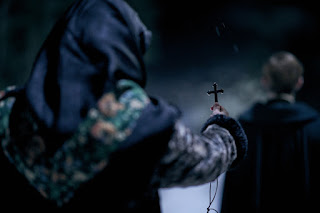 Sadly, I was proven right and as the ship burns and sinks with Dracula cast adrift in the only surviving box of earth (another rule that seemed to have survive the Moffat and Gatiss cull.) We inexplicably snap forward 137 years to present day England and an awakened Count held in the spotlight of a helicopter. Apparently, it took the Count 137 years to revive after the shipwreck and we now have the denouement to this series being played out in modern day England. The Count selects his prey by using dating apps and the Harker foundation has been set up to stop him. (They don't.) Indeed, Moffatt and Gatiss seem so childishly excited about bringing Dracula to the modern day that everything else is secondary to their own self praising and back slapping brilliance. We are supposed to marvel at the astonishing writing that links the past to the present day. Except it isn't brilliant, it jolts and the entire series falters and grinds to a devastating halt. It just doesn't work and, as Moffatt rehashes yet more of his tired Whovian ideas (the concept that when an undead is cremated it hurts is something he brought to screen at the end of the Eighth Series of Doctor Who) Dracula dies as definitely as any of his unfortunate victims.

Moffatt and Gatiss have succeeded in creating an innovative and new approach to the story of Dracula that should have been heralded as one of the greatest adaptions of all time. Yet, because both men believe their own hideous press and have had their egos blown up by far too many celebrity parties and award dinners, they now feel that simply transferring Dracula to present day with a derisively simplistic premise is something that we are going to applaud. Once again Moffatt has exposed his disregard for others’ work and relies on the lazy use of retcon to produce a series that is poisoned by self-interest and ego. He has betrayed everyone who worked on the production and showed no respect for the incredible cast that gave their talents to his vision. Instead of being remembered as an actor who can take his place with the likes of Christopher Lee, Claes Bang will be known for the version of Dracula that shoved a man in a fridge.

In a final irony, my spellcheck of Gatiss suggested Gutless; I would suggest that this was an accurate spelling of his surname. Stoker would turn in his grave at what they have done to his novel.