CLASSIC DOCTOR WHO ON BRITBOX – The Aztecs 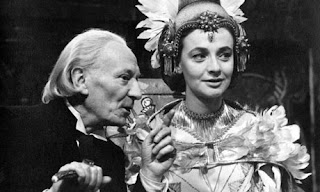 On 26th December 2019, 627 pieces of Classic Doctor Who content were made available to Britbox subscribers. Every Sunday in 2020, our Doctor Who expert, Tony Cross, looks back at some of the classic stories. Here is Today is the First Doctor adventure The Aztecs...

So, The Aztecs is pretty magnificent stuff. Historical episodes tend to stand the test of time better than the science-fiction stories. Nothing ages faster than the past's view of the future I find. Plus, historical drama is a BBC speciality, even if Aztec dramas are few and far between.

For a production stuffed into a tiny studio Barry Newbery's design work adds real depth to the place even if, on occasion, the painted drapes look a little too obvious. The costume work too is rather lovely. Everything feels right, although I can't swear to the historical accuracy of the thing.

However this is a Doctor Who story where the acting really shines. This is Jacqueline Hill at her most wonderful. Mistaken for a reincarnation of the high priest Yetaxa she is determined to 'save' the Aztecs. She wants to ween them off of human sacrifice. She wants to change history. The Doctor is determined that she should not. There's a scorching argument between the two of them in the first episode. Both Hartnell and Hill play it with seriousness. It's one of Doctor Who's finest moments.

At the end of the first episode, just as a sacrifice is about to be made, Barbara steps in to stop it and makes an enemy of the High Priest of Sacrifice Tlotoxl (John Ringham). There are two performances in Doctor Who history that model themselves on Shakespeare's Richard III. There is John Ringham's in this story and Paul Darrow's in Timelash. John Ringham stays the right side of ham, even as you can see the influence. Paul Darrow is the hamtastic (and unintentional) joy of an unloved story. Tlotoxl is a devious spider scuttling about the place from the end of Part One trying to bring down the false goddess. His performance is a highlight.

A quick note though it is, actually, unclear if Barbara was going to act to stop the sacrifice because it is Susan who actually rushes forward to stop it and Barbara acts in her wake.

Barbara's actions throws a spanner into the works as Tlotoxl tries to get at Barbara through her servants. Ian is set against Ixta (Ian Cullen) who is the leader of the army. They are destined to fight three times before an end is made of things. Ian and Barbara get a nice scene too when the discuss Barbara's attempts to stop the sacrifice. It is Ian that points out that Tlotoxl is the standard not Autloc (Keith Pyott) the High Priest of Knowledge, who has befriended and believes in Barbara's divinity. Pyott also gives a lovely calm performance giving Autloc the air of a Church of England vicar. It will be Autloc whose faith ends. It will be Autloc who leaves for the wilderness. Barbara loses. History will carry on as before. The Aztecs are doomed. The Doctor though tries to reassure Barbara that in saving Autloc they have done one good thing.

One can argue that there's an interesting morality tale here about colonialism and the danger of positioning oneself as the 'great white saviour'. There is a law of unintended consequences in this interference stuff. Barbara probably insures that Tlotoxl (and those that follow him) have more power than they might have done had she left things alone.

I should also add that Hartnell is brilliant in this. One of the sub-plots, based around his attempts to find out important information, is his dalliance with Cameca (Margot Van der Bergh). The Doctor finds himself engaged to her as the result of brewing up a cup of cocoa. The Doctor's response to this is played beautifully by Hartnell. The whole relationship is well-played. Cameca finds herself saying farewell to the Doctor who is genuinely upset at the leaving of her. There's a real sense of loss at the end.

Carole Ann Ford was - I think - on holiday for a couple of episodes of this story so her input is limited to a couple of pre-filmed sequences showing her refusal to know-tow to Aztec traditions. It's not Susan's most exciting appearance alas and she's probably the only regular that gets let down in The Aztecs.

So if you want to pick a Hartnell story this isn't a bad one to start with. It isn't pacey, but that's because most 60s Doctor Who is slow in comparison with modern television but it has loads of good performances, especially from Jacqueline Hill who really shows what she's capable of here and Hartnell himself.