CLASSIC DOCTOR WHO ON BRITBOX – The Edge of Destruction 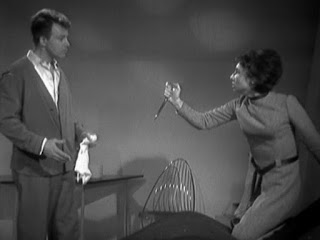 On 26th December 2019, 627 pieces of Classic Doctor Who content were made available to Britbox subscribers. Every Sunday in 2020, our Doctor Who expert, Tony Cross, looks back at some of the classic stories. Here is the First Doctor story The Edge of Destruction...

The Edge of Destruction is an odd fish. A two-part story designed to be a short-notice, cheap space filler. Doctor Who might have finished after this. Might. It's one of the strangest stories in the programme's history.

Only the main cast are in it and for most of the story they're all acting in a rather odd way. As if they've been possessed. The Doctor thinks Ian and Barbara have sabotaged his ship. Susan is having a major freak out. Ian's dazed and confused. Only Barbara seems to keep her wits about her for most of the story.

Indeed the first episode has the sinister feel of one of Pinter's darker plays. Lots of pauses. The scene where Susan threatens Ian with a pair of scissors - which upset some people in the BBC - is genuinely creepy. It's Carole Ann Ford's best moment as Susan so far. Ian's reaction is bafflement. It's almost as if he's woken up with a terrible hangover.

Something weird is happening. The TARDIS is doing odd things. Its doors are opening and closing. The console is electrified. Clocks are melting. The scanner is showing images that clearly aren't what is outside. No one has any proper explanation. There are hints that someone - or something - has got inside the ship (and the first episode certainly plays like their something taking control of people). Then the Doctor starts to think that there's dodginess afoot from Barbara and Ian, which gets short shrift for Barbara.

There's a great speech from Barbara, delivered with real bite by Jacqueline Hill, where she points out to the Doctor that if it wasn't for Ian and Barbara the Doctor and Susan would never have escaped either the Cave of Skulls or Skaro. In the second episode the Doctor threatens to throw Barbara and Ian off the ship. He's not thinking straight.

As the problem is solved - and turns out to be both disappointingly mundane and marvellously unusual - the Doctor has to come to make his apologies. Ian accepts them without hearing the words. It takes a bit longer for Barbara to come around. After all the Doctor has said some terrible things to both of them.

In a way though this is the story that changes the Doctor. After this he accepts Barbara and Ian. They've nudged his morality. The Doctor, from here on in, is gradually 'infected' with a 'humanity' that he didn't seem to have before. Hartnell's still not quite the Doctor we've come to expect but this is the first step towards changing that.

All the main cast get to explore their parts and there's a real strength to Jacqueline Hill's performance above all, although both Carole Ann Ford and William Russell have moments. You could see the potential of Susan here, which is why you then can understand why she was a bit disappointed with how the part was panning out. But Jacqueline Hill stands out for me.

Hartnell is good and gets probably his most complicated speech - so far - as the Doctor, which is his soliloquy on the creation of a solar system. How much of it Hartnell understood I don't know but he delivers it as if all this has come rushing straight from the Doctor's mind. It's as if his internal monologue has escape in all the excitement. It's a complicated speech and there's not a single fluff, which might be the result of Hartnell worrying about it so much. I like it. Mainly because the final half-suppressed excited giggle.

The sound design in this story should also be praised, especially the way the TARDIS comes to back to life gradually after the problem is solved.

So it's an odd little two episodes but worth a watch. Whether you come out of it at the end baffled, frustrated or amused I don't know. Me, I enjoyed the oddity of it.