CLASSIC DOCTOR WHO ON BRITBOX – The Romans 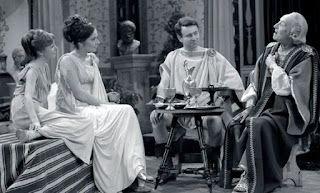 On 26th December 2019, 627 pieces of Classic Doctor Who content were made available to Britbox subscribers. Every Sunday in 2020, our Doctor Who expert, Tony Cross, looks back at some of the classic stories. Here is the First Doctor adventure The Romans...

The Romans is a lovely story. It has some tonal oddities. It balances (almost) farce with some genuine moments of darkness. It also features probably the first - and only (?) - comic death in Doctor Who. Poor old Tigellinus.

It is also a rare story that begins with the TARDIS crew having a proper holiday. They've been squatting in a wealthy Roman's villa. This is my own head canon but if Ian and Barbara weren't an item before The Romans, they definitely are by the time it begins. This is the episode to watch if you want to start shipping Ian and Barbara.

Because this is Doctor Who, of course, things have to get exciting. The Doctor and Vicki head off to Rome, discover a corpse and The Doctor gets mistaken for lyre-player Maximus Petullian. Petullian is supposed to be heading to Rome to play for Nero (Derek Francis). Meanwhile Ian and Barbara get kidnapped by slave-traders, separated and then re-united in Rome. All roads, as the episode title has it, lead to Rome.

Poor old Ian gets the worst of the deal. He becomes a slave-rower on a ship that gets wrecked, threatened with the arena and forced to fight his friend Delos (Peter Diamond) and then has to avoid being captured long enough to be reunited with Barbara.

Meanwhile Barbara is bought by Tavius (Michael Peake), who is Nero's slave buyer and ends up in Nero's palace as servant to Poppea (Kay Patrick), the Emperor's wife. Nero falls for Barbara. * And she ends up trying to fend him off. There are some magnificent farcical chase scenes up and down corridors. I should stop here and comment on the excellence of Christopher Barry's direction, which makes the most of limited sets and for once the fight sequences look really good too. This is apparently because Peter Diamond, as well as playing Delos, was also fight arranger and Barry Jackson who played Ascaris was also a stunt performer.

Ascaris and the Doctor have a rather comic fight, which Jackson, does a fine job of making the whole thing look pretty good, even if it is more farcical that martial.

The fight between Ian and Delos and then with the guards is probably the best fight in the series so far. It doesn't look like actors poking stuff at each other in slow motion. It's pretty fast and fluid.

Indeed, so is the whole story. The Doctor and Vicki manage to miss Ian and Barbara during their whole time in Rome, even as they are literally feet apart. Farce requires clockwork precision, and within the limits of a BBC studio. Christopher Barry manages to make it work.

Derek Francis as Nero is delightfully over the top. He is mainly played as vain, foolish and decadent but there is one moment - post the Ian and Delos fight - where he shows a genuine cold-hearted nasty streak.

It's the first Doctor Who story where the villains are played more for laughs than genuine threat. Most of the serious threat comes from minor characters like Poppea, the slave-trader Sevcheria (Derek Sydney) or the Galley Master (Gert Klauber).

To cut this short I love The Romans. It's is an out and out comedy with occasional moments of darkness.

My only quibble is the Doctor's apparent pleasure at giving Nero the idea for the Great Fire of Rome was a bit...out of character? But at least it gave us a nice gag in The Fires of Pompeii.

I should mention that Hartnell seems to be having the time of his life in this story. He plays comedy so well and writer Dennis Spooner gives him both action and lines to get his teeth into. It’s fun watching the Doctor be Doctor-ish: diving in and running rings - mostly - around those who are trying to make his life difficult.

This is Maureen O'Brien's first 'proper' story and she's rather brilliant. She doesn't have to do the granddaughter stuff so can watch the Doctor with a certain cynicism. She's got a lightness of touch too, which is perfect for the Romans.

I should note it contains Doctor Who's first deliberate double entendre made joyous by the way Jacqueline Hill plays it.

If you're thinking of dipping your toes into the William Hartnell era this wouldn't be a bad place to start because you can see what Hartnell is capable of when given a good script by a good writer overseen by, probably, the best director of early Doctor Who Christopher Barry. It's funny. It's dark. The main TARDIS team get to be rather good. In fact, it feels rather like a New Doctor Who story in many ways.

*Jacqueline Hill is rather stunning here. I know that's a terrible male thing to say. But I've said it.