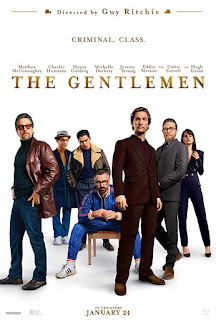 Hugh Grant wants to tell you a story… Actually he wants to tell you two stories. Firstly, that he can play against type, that type of course being a plummy voiced toff. Here he certainly looks unrecognizable, sort of non-permed, goatee era Tom Jones, but is he convincing in his snaky, selling to the highest gangster guise? I think he’s rather undone by the second story he’s trying to spin, in that is how the film’s narrative is structured. The film is largely framed throughout by Grant’s character Fletcher narrating the action that immediately unfolds on screen, to gangster fixer Ray played by Charlie Hunnam. Sometimes Fletcher embellishes his story with wishful thinking about outcomes, other times it’s part of a fictional film screenplay he has thrown down on Ray’s table. Metafiction in film? Doesn’t really work. His story is his pitch for a finder’s fee of £20million for information he has to sell on gangster deals going down, in order to finance his film. But Fletch is not as clever as he thinks he is, both in his mockney dialogue, nor his role in the labyrinthine plot of double, triple and quadruple-cross. The storytelling device doesn’t work; if you have to explain the various alliances even as they shift, then it’s too much ‘tell’, not enough ‘show’.

I found that I didn’t care about the gangsters and who was going to win out. Possibly because most of the characters we first encounter through Fletcher’s jaundiced eye. The sole exception to this, is the top lion Mickey Pearson, a self-made purveyor of the finest weed to the British aristocracy, played by Matthew McConaughey. McConaughey is such a superior actor to any of the others that he dominates the screen when he’s on and there’s a more than credible sexual fizz with his wife Rosalind, played by Michelle Dockery despite her accent being hewn from TV soap “Eastenders”. But the ending- spoiler alert- so rips off “The Long Good Friday” it’s pretty unforgivable and not even McConaughey can redeem that. In fact, there are so many echoes to this small circle of movies made by Tarantino and Ritchie, that it all gets a bit tiresome; for Ray the Fixer, read Keitel’s Mr Wolf; for Brad Pitt’s Irish tinged Romany accent in “Snatch”, now we get Colin Farrell and both have boxing in their blood. And so on and so forth. It’s all so incestuous and cosy and lazy. Neither Tarantino nor Ritchie are really pushing each other to further achievement in the genre. The real challenge would be for both directors to make a film without gangsters, guns and swords. Scorsese managed to move out of the narrow ghetto of gangster movies and it never did him any harm.

So there’s just a reek of complacency running throughout this movie. It’s supposed to be funny, the ads say a ‘laugh a minute’. I waited an hour in for the first titter. Again, with Fletcher having to impart so much information on who is aligned with who, there’s little room in the first part of the film for gags. We all know Ritchie got to hobnob with the British aristocracy, but they don’t make for a terribly interesting, or sympathetic group, and the sight of the Fixer having to make a detour to pull a toff’s graceless daughter from a heroin shooting gallery elicits no emotion above a shrug. The two main gangsters vying for a super drug deal are both Americans based in the UK, which doesn’t really make much sense, but at least afforded us McConaughey. Jewish and Chinese gangsters are portrayed by stereotype, the Chinese kingpin is watching satellite horse racing from Hong Kong of course, while the Jewish guy is trying to drive down the price of the drugs, as a matter of business principle rather than criminal pride.

I love a good gangster movie. “The Long Good Friday” and “Get Carter” are two of my all-time top films of any genre. But sometimes the genre offers nothing new whatsoever, and this tendency is increased when the films are so consciously internally referential. A return to form for Ritchie? A deviation from all previous form for Grant? Neither.

His books are available from Amazon here.
Email ThisBlogThis!Share to TwitterShare to Facebook