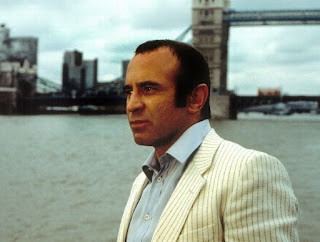 Spend your Friday with the gangland kingpin Marc Nash as he looks back on The Long Good Friday...

America produces a lot of gangster movies. From Prohibition mobsters, to films about drug kingpins, the Mafia and street gangs. So many films in fact that well-worn gangster tropes have now become cliché. Britain doesn’t produce anything like as many gangster films, but when we do they are really rather spiffing. I give you “Performance,” “Get Carter” and of course the inimitable “Long Good Friday” which knocks any other gangster movie into a cocked hat.

It’s one of those rare coalescences of every element in the making of a film coming together at the top of their game and all fitting together perfectly. Barry Keefe’s script is that precious thing, a cogent plot that cranks up the dramatic tension as you’d hope, but goes further, being chockful of ideas and comment on the society it portrays, while also offering three-dimensional characters that allow the cast to forge nuanced relationships on screen and finally, it’s very funny, a lot of cracking jokes abound amid the mayhem and murder. The cast were all relative newcomers to films, this being Bob Hoskins’ first leading role, Helen Mirren likewise, a 24 year old Pierce Brosnan making his celluloid debut and even that Charlie Fairhead from off TV’s “Casualty” making his movie breakthrough. The settings are old London town, (without a single sighting of a bus or black cab, so real rather than tourist London); from a boat trip down the Thames, through the majestic but run down Victorian houses of Brixton, to the inside of an abattoir as local crime bosses are hooked upside down like joints of meat as Hoskins’ kingpin want to have a chat with them about an eruption of violence against his organisation. Heck, even the theme tune is perfectly pitched, sounding like a Greek Chorus exhorting, chiding and trumpeting, only having been given the synthesiser treatment. Indeed the use of the theme music a few minutes in and at the very end are a key component of the narrative drive.

LGF was one of the first 18 movies I ever saw, being just 16 when it came out in 1980. I had no idea what was going on in the early scenes, but then Hoskins’ gangster character Harold Shand marches through the arrivals lounge at London airport as the music strikes up and suddenly I was fully rooted and placed. Shand has come home to London after a bit of business in Europe. He strides like he’s not only ‘home’, but that he owns the place, he is in full possession of London. Which as its top crime kingpin, he is. Hoskins a small man, radiates menace and entitlement in his gait. His performance throughout the film is spellbinding, as a man teetering between thuggery and sheer brute force to accomplish his aims against the sophistication and civilised behaviour his new venture in semi-legitimate business demands. His moll played by Mirren brilliantly steers him through, smoothing off his rougher burs, oozing charm and sophistication to the business types and politicians they have to win over and no little brains to help him reach critical decisions. There is very little suggestion of sex between them, but the power and control ricochet around the pair as they seek an ecstatic consummation of another kind. Shand also has a protégé-cum-symbolic-son, played by the Charlie Fairhead actor Derek Thomson, who represents the new order of educated, confident, brash 1980s and so wants to emulate Shand that he lusts after Mirren’s character just to experience and indeed inhabit every last cell of being that Shand has and is. 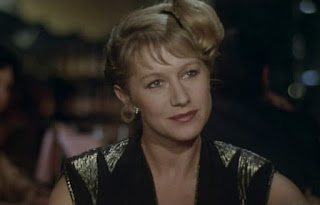 So you have profound portrayals of relationships, but you also have some excellent set-pieces such as the scene in the abattoir, or the one at the stock car racetrack. However, what raises this film above others that also contain these elements, is the ideas it was dealing with. Not just a gangster movie, it was also offering political commentary and a presentiment of the future. This is 1980, just as Britain was just entering Thatcherism and the radical social revolution that brought about. Shand returns from abroad to give a rousing speech on his boat as it sets off on a journey from Tower Bridge. He talks about London’s proud heritage, but also that here at the start of the decade of the 80s a bright new future dawns as the old docklands is converted to embrace Europe and put London firmly at its hub. It’s a brilliant scene because Tower Bridge that pinnacle of Victorian engineering and gateway to Britain’s imperial wealth coming in along the Thames, recedes as the speech goes on, as indeed he is on a pleasure boat rather than a trading boat, London no longer is a trading hub for material goods (only speculation on commodities), the Thames itself being completely repurposed. This is the film’s critique of Thatcherism. Shand and the corrupt politicians and businessmen he has in his pocket fervently believe they can make Britain great again, but it relies on being in Europe. So with Brexit now upon us, his vision has collapsed, while his mid-level business partners are completely dwarfed by high finance and the corporate banks that moved into Docklands and which now threaten to pull out and relocate to Europe. It took a bit longer, but like the millennial Dome, Docklands too will become an empty husk. Harold Shand was a man who tried to transcend the limitations of his time and his background and ultimately, like any Greek Hero, was unable to overcome his own hubris and crashed and burned spectacularly. You can put the legitimate businessman into the thug, but you can’t take the thug out of the businessman, as he reverts to his old ways to try and deal with the attack on his organisation. The final scene, an incredibly daring study of Hoskins’ face without dialogue as he goes through a gamut of emotions as he realises his enemies have beaten him, played out to the theme music, this time of a very different feel from him striding through the airport, is just the most stunning piece of cinema and a bravura acting performance.

The film hit a bit of controversy as its producers The Grade organisation declaimed it as IRA propaganda (Shand’s criminal gang incur the wrath of the IRA and end up at war with them) and refused to release it without changes. One of those changes involved dubbing Hoskins entirely with a Black Country accent, for reasons I can’t quite fathom if the complaint was about IRA sympathies and Hoskins sued them. In the end the film was returned to the director and he sold it to George Harrison to finance the distribution in its original edit. Among Hoskins’ expressions in that final scene, is a grimacing smile that the IRA have out-thugged him, that the malevolent smile of Pierce Brosnan’s character sat in the front seat of Shand’s car pointing a gun at him, is that their idealism topped his, because it’s more deeply rooted in history, identity and a defined nationalism in the way that Shand’s Englishness wasn’t, having been built upon unsustainable, cobbled-together romantic notions of Englishness. Exactly where we find ourselves now in 2017 post-Brexit referendum and with Theresa May in charge.

Watch this movie again and then have a think about Brexit. You’ll be more scared about its implications than you will getting a gander of Shand’s driver ‘Razors’ 10 inch scar.