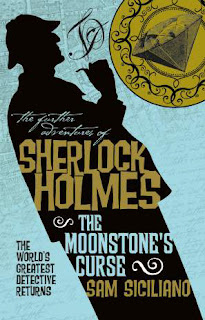 Titan Books announce the publication next month of The Further Adventures of Sherlock Holmes: The Moonstone's Curse from Sam Siciliano...

A desperate aristocrat, a stolen jewel and a centuries old mystery send Sherlock Holmes into another thrilling case!

The aristocratic Charles Bromley arrives at 221B Baker Street to beg SHERLOCK HOLMES for his help. Bromley believes that his wife is in danger, as she has refused an offer to sell the Moonstone, a fabulous diamond that has been in her family for generations but which is said to be cursed. When a jeweller is found murdered, it seems as if the Moonstone deserves its reputation. Then the diamond is stolen, and Holmes must try to unravel a mystery centuries in the making.

With his deerstalker hat and clay pipe, Sherlock Holmes cuts a distinctive figure as the most recognised detective in literary history. With the BBC smash hit Sherlock starring Benedict Cumberbatch and Martin Freeman having just completed its fourth series and CBS’s Elementary series enjoying success in its fifth season, as well as film rumours over the third instalment of the blockbuster Sherlock Holmes movie franchise, we have never been more enamoured with the world’s most famous detective. The new novel from Sam Siciliano comes out on 14th February and we'll have a review for you soon.

Sam Siciliano is the author of several novels, including the Sherlock Holmes titles The Angel of the Opera, The Web Weaver, The Grimswell Curse and The White Worm. He lives in Vancouver, Washington.