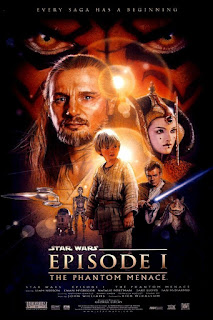 Our small band of Gunters here in The DreamCage universe are reviewing every film mentioned in Ernest Cline's Ready Player One. This week, David Ames visits a galaxy far, far away...

There are numerous words used when referring to today’s film: worthless, terrible, disgraceful. For my money, I use the phrase hopeful, because that is how it makes me feel. Today, as I again don my Gunter cap, I look at Star Wars: Episode: The Phantom Menace. Before we begin this, as we have begun so many before, I want to preface my review with the understanding that many, MANY people despise this film and its subsequent sequels. That being said, I personally love it and to this day, I enjoy watching it. The Phantom Menace has its flaws and they are numerous but what I see when I watch it brings to mind a quote from F. Scott Fitzgerald: “an extraordinary gift for hope, a romantic readiness such as I have never found in any other person and which it is not likely I shall ever find again.”

The time in between Return of the Jedi and The Phantom Menace was long and dry, unless you were one of those who helped themselves to the substantial amount of Extended Universe material through comics and novels. Episode I will go down as one of the most anticipated films in the history of cinema and while it fell flat for many, for myself it was more than I had hoped for. Before we delve into opinions and problems, let us first establish the story.

The film begins with the classic crawl which lets us know that the galactic republic has been engulfed with turmoil over the taxation of outer trade routes. The small planet of Naboo has been blockaded by the Trade Federation and two Jedi have been dispatched to negotiate a treaty.

As the film unfolds, we are introduced to the Trade Federation and their greedy leader Nute Gunray, a Nemoidian (somewhat lizard looking Homonid) who, after receiving a message from the Sith Lord Darth Sidious, has decided to kill the Jedi Knights: Obi-Wan Kenobi and Qui-Gon Jin. They recognize the Trade Federation has a robotic army and are planning to invade Naboo so they hide, board ships, and land with the army in hopes of discovering the true plans of the federation and warning the Naboo.

I don’t want to give away too much but in the course of their journey, we are introduced to easily the most hated character of the Star Wars Universe: Jar Jar Binks. As the collective of characters escape the planet with the ruler of Naboo, Queen Padme Amidala, they make their way to the senate to beg for assistance. They are stalked and attacked by an unknown force, a Sith Lord known as Darth Maul (the most badass of all the Star Wars villains in my humble opinion).

The group is stranded for a time on the desert planet of Tatooine where they encounter a young slave boy named Anakin Skywalker (DUN-DUN-DUNNNN!!!). The group requires replacement parts for their ship and after placing bets on young Skywalker to win a Pod Race, they are able to leave, under attack from Maul. Once they make it to the senate, they are made aware that the Senate will not aid the planet and so they return to fight for Naboo on their own.

The group enlist the help of the Gungans, Jar Jar’s people, and after many interesting and action filled battles, they are successful in breaking the blockade. The movie ends as all Star Wars films do: no dialogue and a beautiful John Williams Score.

Now to the nitty gritty. Let me first address all of the major concerns voiced by haters of this film. Jake Lloyd (Anakin) received an immense amount of grief for his portrayal of the young Anakin Skywalker. True, his performance was a little wooden and forced but he was 10 when they filmed and that unfamiliarity with acting is to be expected. He was serviceable and, if I do say so myself, is at least as good as Hayden Christensen (although that bar is definitely not high). 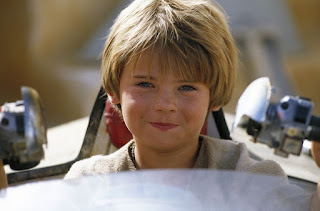 Also, there was the unfortunate attempt to explain the force using Midichlorians. This is idiotic and luckily it appears as though Disney is rightfully going to simply forget that part of the history. There is no need to explain away the mystical properties of the Force with science. I understand Lucas’ purpose but it isn’t needed and obviously isn’t wanted.

Next comes the use of Special Effects. While this isn’t as heavily weighed upon as it is in the sequels, I feel that it shouldn’t be an issue at all. New technology, wonderful worlds, and the ability to create interesting and unique creatures and planets—all of these things are welcome and help to define the Star Wars Universe in a much more detailed light. I cannot even begin to complain about that.

The Jar Jar issue is easily the most hated of all and I understand that longtime Star Wars fans find him stupid, annoying, and utterly worthless but in my opinion they are dead wrong. Yes, he is cringe-worthy most of the time but consider the audience. Lucas was creating a new trilogy and if looked at as a whole, The Phantom Menace is really a kid’s movie. With that mindset, Jar Jar is less annoying and more understandably slapstick to appeal to a younger audience—an audience that embraced him fully. My only issue with Jar Jar also lends itself to other species as well. The voices chosen for the different creatures, while possibly not intended, is somewhat racist. The ethnic stereotypes seem pretty on point, although they have always been denied. The Gungans talk like African American Slaves in the American south; the Trade Federation are slimy traders with a somewhat Asian (Chinese/Japanese) accent and sensibility; the Toydarians have large noses, are incredibly greedy, and care only about money (representing Jewish stereotypes). I am not saying that this was intentional at all—in fact I think it was accidental. The issue is that even if the racial stereotypes weren’t an issue, the Nemoidians and Gungans simply don’t necessitate this type of accent. It is not only distracting but also hard to understand.

My personal issue with the film falls solely on its portrayal of Darth Maul. He is and will always be one of my favorite Star Wars characters. He looks amazing, his backstory is incredible, and he is vicious. His fighting skills are almost unmatched and therein lies the issue—if he is as incredible as the film portrays him, then how does he die in such a manner? If he dominates both a Jedi Master and his Padawan, and then kills the master, how does he die in such an anticlimactic way. I’m not even mad that he was defeated—I know that he needs to for the plot. My issue is couldn’t they have found a much better way for him to be defeated? Luckily, he was brought back in the extended universe and that is now canon for Disney.

Overall, the film is not the best in the series but I also don’t think it’s the worst. For my money Star Wars is a lot like pizza or sex: even the worst I’ve ever had was pretty enjoyable. There are issues with this film but what it does is play with our emotions and help to fill in the gaps of characters who we have always loved and wondered about. There is so much vitriol surrounding this film and its sequels but honestly, I am so happy simply to have more Star Wars.

It is all I have wanted since I was 7.