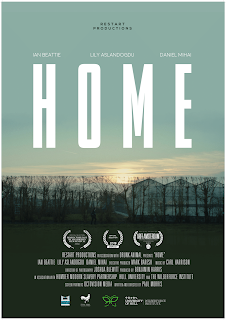 Written and directed by Paul Morris, Home is a sweet story of an unlikely friendship that unfurls into a story of modern slavery and I must confess to being incredibly moved come the end of this 17-minute little marvel.

Bella (Lily Aslandogdu) is a school child walking to and from school who, one day, is accosted by bullies and saved by a gardener, a Romanian man named Dorin (Daniel Mihai). After thanking her saviour, she returns home where she has cooked for her working father (Ian Beattie). A conversation starts about the loss of Bella’s mother and you can tell from Bella’s face she is fearful of losing the memory of her mother who died three years previously when Bella was a lot younger. Her father tries to comfort her but is hiding the family’s debt and trying not to get Bella caught up in what seems like a serious issue. Bella is found crying in the rain by Dorin who takes her to the gardener's shed he has called home and during a conversation about loss and missing family Dorin confides to Bella that he is actually a prisoner in the U.K. as his boss has taken his passport to keep him here, working for no money, and keeps him living in the shed. Bella is astonished and wants to go the police but Dorin, fearful he won’t be believed, swears Bella to secrecy.

To continue my recap of this marvellous film would be to add too many spoilers and rob you of your own discovery, but it's safe to say that Morris has created a thought provoking project that he ends with a shocking stat about U.K. modern slavery from the Global Slavery Index. The cast is small but tight with both male actors performing as you would expect but it is Lily Aslandogdu who deserves all the credit for holding together an overwhelming subject matter with the poise of a much more experienced performer, most definitely one to keep an eye on in the future.

Is Home perfect? Not quite. Whilst I found the soundtrack by Carl Harrison evocative and perfectly in keeping with the films story, I felt it was just too loud and at both the beginning and the end of the film I found myself adjusting my volume control, something I shouldn’t have to do for a film. Some of the scenes could have flowed visually into each other slightly better, a sharp edit and a momentary black screen I found to be slightly off putting, but these are not serious gripes just observations. The film's subject, its casting, its look from cinematographer Joshua Blewitt, and its overall emotional impact more than make up for two small items of technicality that is probably just me being fussy anyway.

The entire team involved in Restart Productions and the cast and crew of Home have much to be rightly proud of and I am grateful for the opportunity to be so emotionally entertained and educated at the same time.

Watch the trailer below:

Find out more about Home on the Restart Productions website