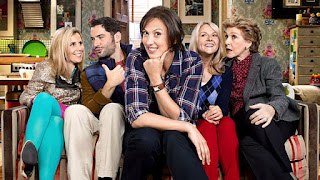 With last night's 10th Anniversary show for Miranda still ringing in our ears [PLEASE MAKE IT STOP - Ed] a reminder from a few years back (after the big finale of the series on New Years Day 2015) of why Susan Omand thought the comedy was so good...

My name is Susan and I watched Miranda.

I feel safe in admitting that now that it’s definitely finished, with the two finale episodes over Christmas tying things up forever in a cheesy bow, so you won’t often get a chance now to point at me and laugh but, for the three series it was on, it was one of the very few things on my “must watch” TV list and guaranteed to have me snorty-giggling into my coffee and startling the cat.

The basic premise of the sit com is that Miranda (Miranda Hart) is 6 feet 1 inch tall and gets called 'Sir' quite a bit. She owns and lives above her own joke shop, naturally, managed by her childhood friend Stevie Sutton (Sarah Hadland), which is next door to a restaurant, where on/off romantic interest, Gary (Tom Ellis,) is the chef. Never quite “keeping up with the Joneses” and her old boarding school friends, like Tilly (Sally Phillips), who regularly calls her Queen Kong to add to her social awkwardness, she is also a constant disappointment to her mother, Penny (Patricia Hodge), who is desperate for Miranda to get a proper job and a husband, so she can boast at the tennis club, and keeps trying to set her up.

So far, so lame as an idea, right? So what made it so stand-out brilliant for me? Firstly the writing was comedy gold, successfully combining that fine blend of one liners and slapstick that utilised the talented cast superbly. Talking of casting, having the sublime Patricia Hodge playing Miranda’s mother Penny was genius as anything she said was just unexpectedly funny. I also loved that each of the characters had their own catch phrases, from mother’s “What I call a” to posh school pal Tilly’s “bear with” every time she answers the phone (I guess you had to be there). There were recurring jokes too, like Stevie’s regular use of a Heather Small mask to ask “What have you done today to make you feel proud?” The visual humour and physical comedy was huge – sometimes literally with the un pc contrast in height between Miranda and the diminutive Stevie being played upon a lot. Miranda’s facial expressions and generous use of the breaking of the fourth wall trope were also very reminiscent of the genius of Eric Morecambe and a single raised eyebrow could be hilarious without a word ever being uttered.

As a modern comedy, Miranda is gentle, easy family viewing, almost nostalgic of the sitcoms of the 70’s and 80’s, in that it was not reliant on overt sex, violence, bad language or shocking humour. Yes, there was plenty suggestive innuendo in the “will-they, won’t-they” of Miranda and Gary’s relationship, amongst others, and yes, fun was poked at just about every walk of life but there was no malice intended. Couple that with the surrealism of fruit friends and the ridiculousness of some of the situations she found herself in through no fault of her own and there is something for everyone. I think the main thing that made this comedy really funny for me though, was the slight discomfort of identifying far too closely with the awkwardness of Miranda as she tries to negotiate the rubbish life throws at her.

UPDATE - I still stand by this opinion, so much so that I included Miranda in my Top 5 Comedy Shows of the Decade last month but I do realise I'm in the minority, especially here in The DreamCage office. However, now, I think I know why that might be, thanks to reading the #Miranda Twitter comments after last night's special from people (mostly men) who said they didn't understand what was so funny and that it was awful and others (mostly women) who said they loved it and, in some cases, it changed lives for the better. You see, it wasn't common 10 years ago to get mainstream comedy shows both written by a woman and about women being ridiculous and funny, awkward and independent and not at all sexy or subjugated, apart from always having to battle against mother's expectations. Miranda gave us, the ridiculous, awkward, mother-battling women who watched it, permission not to fit in with the expected stereotype that we usually saw on TV. As I said above, it's that empathising connection with the discomfort that makes it so funny. And, if you don't "get" that, you won't "get" the comedy either.

Find all three series of Miranda on Amazon Prime Video