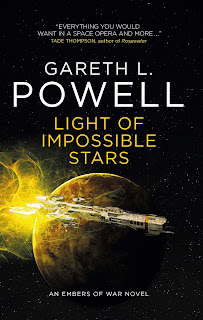 Steve Taylor-Bryant overcomes a fear as he reads the conclusion to Gareth L. Powell's Embers of War series with Light of Impossible Stars, out now from Titan Books...

I fell out of love with science fiction books many years ago. Growing up in the late 1970s and early 1980s with dyslexia led to reading and writing being out of my reach for a long time. As my friends were advancing and expanding their tastes, I was struggling with children’s books and phonetic homework. Eventually a very good English teacher got a hold of me and, in her own time, gave me the support I had been deprived of for so many years and my skills rapidly advanced albeit still slower than anybody else’s. I loved science fiction films and television and marvelled at the worlds being created and the rich characters portrayed on the screen but my lack of confidence in my reading and some, still do this day, problems with words and terminology meant that Dune the film was okay but Dune the book was not, Arthur C. Clarke? Forget it. I continue to this day to improve my reading and writing but age has given me at least understanding so in a lot of books my addled mind can fill in any gaps in a story that maybe words didn’t explain to me. Science fiction though stayed off my radar for a long time, I was scared of it to be honest until one day I dived in and picked a book a friend said I would thoroughly enjoy and he didn’t think I would struggle with and that was Embers of War by Gareth L. Powell. I found the worlds he created fascinating and the story of two sides at war across the galaxies with a space version of The Red Cross, the House of Reclamation, in the middle was great. The characters were fully fleshed out and relatable in ways I wasn’t expecting and damn if the author didn’t hold back in killing people off you expected to be in it for the long haul. It was extremely entertaining and incredibly emotional anyway, but to finish a science fiction book without being filled with self-hatred was a barrier I never expected to cross. Fascinated by a spaceship born of the DNA of a dead soldier and a dog and an engineer of multiple faces as hands and drawn in by the rich landscapes I hurried onto Fleet of Knives, the second in the Embers of War series. The story became more vast in scope, more violent, more sciencey and fictiony and yet I didn’t struggle, I just lapped up every page (chapter 49 by the way is worthy of some award on its own) and so when our friends at Titan Books allowed me a review copy of the final book in the series I jumped at the chance.

Light of Impossible Stars picks up where you would expect it to having read Fleet of Knives but Powell does enough with his narration from his characters that you can read this book as a standalone if you wish, but why would you? With the Butcher of Pelapatarn at the head of the Fleet of Knives on a mission to destroy all ships capable of firing upon something and the crew of the Trouble Dog trying to not be destroyed whilst finding out where the space creatures in the Hypervoid come from and why they are attacking and it seems all routes to freedom and answers lie within the Intrusion and possibly with a scavenger named Cordelia Pa.

What I love about Powell’s writing in these three novels are the chapters coming from the point of view of the characters, so every change of chapter brings you the story from a different perspective. One moment the Trouble Dog is showing you her intelligence, the next a Druff engineer is preaching about work and the World Tree, then you are on a world made of plates, then in the command room at the head of the fleet and it's these different versions of the story as it unfurls that is vital because underneath the trappings of space ships and alien lobsters is a deep emotional tale of humanity in all its peaks and troughs. It's about love and loneliness and loss, it's about corrupting power and staunch political views, it's about working hard and taking risks and all these emotional and physical states coming from one voice could sound preachy but when all sides of a scenario are discussed from all sides a story becomes fascinating and Powell manages to each string of the story as taught as it needs to be.

The end of Light of Impossible Stars seems final in a way, a happy ending? But there is definitely room to revisit this particular universe should the author choose to, and I hope one day he does. In the meantime, I’d just like to thank Gareth L. Powell for a stunning conclusion to a wonderful series and for him being the author that broke my fear of science fiction books I will be eternally grateful.