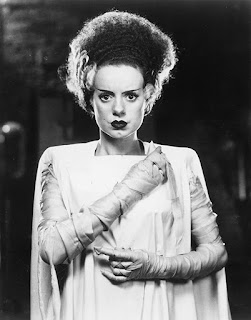 Daniel White dug through his vast horror film collection and is now rewatching a box set of classic monster movies from Universal. For his next Universal Monster of the Week, he looks back at Bride of Frankenstein...

In 1935, Universal released the first official sequel to Frankenstein and it is now widely regarded as the finest sequel to ever be made.

Bride of Frankenstein follows directly on from the fiery finish at the end of Frankenstein and again stars Boris Karloff as The Monster with Colin Clive reprising the role of Frankenstein. The film's opening immediately impresses in that it employs no other than Mary Shelley herself (the decision to cast Elsa Lancaster as both Shelley and The Bride is simply inspired) telling the story and bringing out emotional and moral aspects as the original also did. Karloff portrays The Monster with the same understanding and nuance as he had done previously and, with The Monster now being able to speak, there is an even greater depth of humanity and betrayal. Although the body count is higher, there is still the impression that these are not random murderous acts but ones committed due to betrayal and self protection. The Monster's desire for companionship stands in direct contrast with the hate and isolation he meets from those who cannot see behind his physical deformities.

Henry Frankenstein had turned his back on his obsession with playing God but is pushed into creating another Monster by his mentor Doctor Pretorius. The eternal struggle between moral and social boundaries and the pursuit of scientific development has always blurred the line for Frankenstein and yet one cannot fault his motives even though they are doomed to fail. I always feel like cheering when he utters the now classic line of "She's alive, alive." 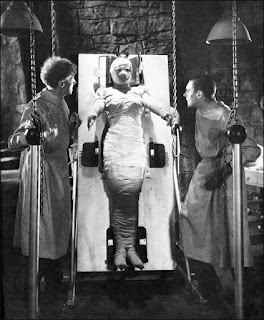 Interestingly we only witness the Bride's reanimation at the end of the film and the majority of film time is spent focusing on the disassociation The Monster feels and the desire he has to become more human. James Whale directs the film with such emotional depth it is almost impossible to feel anything other than sympathy for The Monster as, once again, the real monsters are all too human.

Franz Waxman's score for the film is as stunning as the cinematography with specific themes for The Monster, The Bride and Pretorius. The final chord is dissonant as Whale had insisted that nothing is resolved at the film's close. Waxman brilliantly underscores the tragedy of The Bride's rejection of The Monster and his acceptance of their fate whilst his creator is given a new opportunity of life. As with all Universal's earlier monster films, The Monster is portrayed as very much a victim of his environment and of his creators and the big issues of religion versus science led to fierce censorship calls and, at the time, proved to be extremely controversial.

Universal have wanted to remake Bride of Frankenstein over the years but the closest we have to date is 'The Bride,' starring Sting as Doctor Frankenstein. Also featuring Clancy Brown and Jennifer Beals, it received a mixed reception. Like Jaws and other films it may be as well that this 1935 film is the only direct sequel to Frankenstein and it would be hard to conceive of a way that the beauty and subtlety of this powerful film could be bettered. It wouldn't be the same without Karloff anyway!