CLASSIC DOCTOR WHO ON BRITBOX – The Crusade 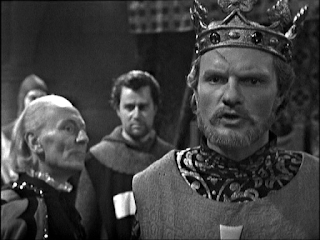 On 26th December 2019, 627 pieces of Classic Doctor Who content were made available to Britbox subscribers. Every Sunday in 2020, our Doctor Who expert, Tony Cross, looks back at some of the classic stories. Here is the First Doctor adventure The Crusade...

The Crusade is the first story since Marco Polo which presents us with the missing episode problem. Only episodes 1 and 3 exist in the archive. So, I went with the audio versions of episodes 2 and 4 that are on the Lost in Time Boxed Set.*

The Crusade is an historical. The TARDIS team arrive in the Holy Land as Richard the Lionheart (Julian Glover) and Saladin (Bernard Kay) are in something of a stalemate. War - or more war if we're accurate - is coming but Richard is tired and is looking for a way out. Into this adventure the Doctor and friends stumble. Immediately Barbara gets grabbed by the villainous El Akir (Walter Randall). She manages to make an enemy of El Akir by pretending to be Joanna, Richard's sister. El Akir is humiliated before Saladin and wants to make Barbara one of his harem. Basically, El Akir is a horrible creep.

In fact El Akir is pretty much the only genuinely nasty person in the story. He's been horrible before the Doctor turns up and would probably have been horrible if the Doctor hadn't turned up. We find this out when we meet Haroun (George Little) and his daughter Fatima (Viviane Sorel). Haroun's eldest daughter was taken by El Akir for his harem and then killed his wife and son. Before burning his house down.

Everyone else seems to be operating from the best of motives. Even the Earl of Leicester (John Bay) who becomes something of a thorn in the Doctor's side is a man trying to do the right thing for his King. He's a warrior. There is a fantastic scene in Episode 3 where the Doctor and Leicester go head to head over the King's plan to bring a peaceful end to this long, drawn out war in the Middle-East by marrying Joanna (Jean Marsh) off to Saladin's brother Saphadin (Roger Avon). It's fantastically written, sounding like something from a Shakespeare history play but really well-acted by Hartnell and Bay. In fact, you almost find yourself sympathizing with Leicester as the Doctor piles on the insults. Leicester's riposte to the Doctor, pointing out that once the talking stops it is the soldiers that have to go and die. In some respects, it is a bit of a counterargument to the Doctor's magnificent speech in The Zygon Inversion but I'm probably reaching a bit there.

As you'll have noted a lot of the actors playing Saracens have very English names. And yes, this involves some blacking up, which to modern eyes is uncomfortable but no one - with the possible exception of Ibrahim (Tutte Lemkow) who sounds a bit like he's doing a comedy Middle-Eastern voice but as the episode he appears in is missing it is perhaps unfair to make that definitive judgement - plays their parts as anything less than sincere. Indeed, Bernard Kay's Saladin is brilliantly played. You get a real sense of the great man here. But still it is still a bit odd for the modern television viewer.

The strength of The Crusade is in David Whitaker's writing, which gives every performer a chance to shine. Julian Glover and Jean Marsh give fantastic performances. It shows that the quality of the writing helps raise the quality of performance. It's also well-directed by Douglas Camfield who manages to make something televisual out of a script a number of directors might have made very theatrical on screen.

Those people who have doubts about Hartnell's performance as the Doctor because they've heard tales of Billy fluffs & over-use of hmmms etc should watch this story to show what he's capable of when given good dialogue with good actors to play off. This is also Maureen O'Brien's best story so far too. Even if she is incredibly unconvincing as a boy - a problem that often crops up in cross-dressing Shakespeare plays now actresses play the women's parts as opposed to young boys as was traditional. She also slips in a line in her native Liverpudlian accent, which is very funny. William Russell is staunch and solid, which sounds like damning with faint praise but he's so consistent that you can easily take him for granted. Jacqueline Hill is magnificent as usual. Why she never comes up in the list of favourite companions more often is beyond me. She's strong, brave and moral. If the show has any kind of moral centre at this point it isn't the Doctor it is Barbara.

So to cut a long ramble short this is a rather good story, which I'd love to see in its entirety. A great script. excellently directed and well-acted by almost everyone concerned. Watch it if you get a chance.

*The quality of the print of The Crusade Episode One on the Lost in Time Box Set is very poor btw. There is perhaps an argument that The Crusade deserves a DVD release of its own. Cleaned up. But I suspect the current mob running the BBC's DVD team won't bother, which is a shame. Unless the missing episodes turn up somewhere.