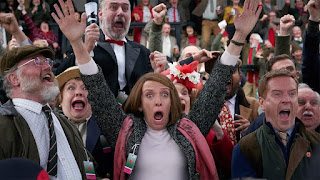 A classic tale of triumph against adversity, watch the trailer for Dream Horse, directed by Euros Lyn, written by Neil McKay and starring Toni Collette and Damian Lewis...

Dream Horse is the true story of one woman’s extraordinary dream to breed and raise a champion racehorse on the allotment of her forgotten Welsh village - and of how she brings her entire community with her.


Jan Vokes (Toni Collette), a middle-aged barmaid at a working men’s club, recruits her initially reluctant husband Brian (Owen Teale) and local accountant Howard Davies (Damian Lewis) to help her bring together a syndicate of local people to breed a foal - which they name Dream Alliance. On the racetrack, he proves himself to be more than a match for the multi-million pound racehorses he comes up against – a true working-class champion, taking on the establishment at their own game. But much more than this, Dream begins to alter the lives of everyone in the syndicate, not least Jan’s. He is everything to her: friend, confidant and an escape from a life of always putting other people’s needs first.

Director Euros Lyn (who is the Bafta award-winning director of, among other things, Happy Valley, Kiri, Damilola Our Loved Boy, Sherlock and Black Mirror), said ‘I grew up in the Welsh valleys where everyone knows this story - it’s a local legend. The moment I read Neil’s brilliant script I knew I had to direct this funny and moving film. Casting Toni Collette as Jan Vokes, our extraordinary heroine and Damian Lewis as Howard Davies, her intriguingly conflicted accomplice is my own dream come true. They’re the perfect actors to tell this true story of how against all the odds, an ordinary woman inspires her community to go on the ride of a lifetime and rediscover a sense of hope.’


Based on the documentary Dark Horse, directed by Louise Osmond, Dream Horse comes to cinemas on 17th April.