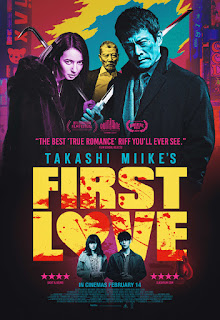 With the film coming to cinemas in time for Valentine's Day, Ren Zelen watched Takashi Miike's First Love (Hatsukoi) thanks to Signature Entertainment ...

About to enter his fourth decade of filmmaking and with over 100 movies to his name, Takashi Miike is one of the most prolific filmmakers working today. With such a huge output (averaging four films per year) his work can vary in genre and in quality. Some of Miike’s crime features can be humorless and gory, but his latest feature, First Love, sees him at his most anarchically playful, his trademark ultra-violence is present, but here it is tempered by black comedy and a touch of romance.

The film begins with Leo (Masataka Kubota), an orphan abandoned by his parents when a baby, but now a promising young pugilist. During one bout he is inexplicably knocked unconscious by what would seem to be a minor punch. A trip to the hospital reveals a grim diagnosis: his boxing career is over - he has a tumor in his brain and doesn't have long to live.

In another part of town Yuri (Sakurako Konishi) has been locked away and forced into drug addiction and prostitution under the name of ‘Monica’. She has been sold off by her evil and abusive father to work off his debt to the Yakuza. Her callous pimps, Yasu (Takahiro Miura) and his Western girlfriend Julie (popular singer-actress ‘Becky’) participate in facilitating drug deals for a Yakuza clan.

The plot is set in motion by an ambitious junior Yakuza, the conniving Kase (Shôta Sometani), who comes up with a scheme which involves joining forces with a corrupt cop and double-crossing Yasu, Yuri’s pimp, in a major drug deal, so igniting a turf war between his gang and rival Chinese triads.

By ‘eliminating’ Yasu, Kase unwisely provokes the rage of his devoted girlfriend Julie, who turns out to be more trouble than the Yakuza and the Triads put together. 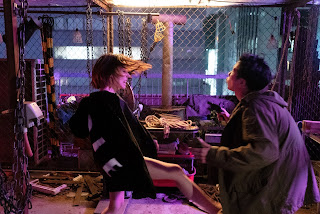 When Yuri runs off from a punter-client, terrified by a drug-induced hallucination of her father, the young fighter Leo, dejected by the news of his own imminent demise and having little to lose, punches out her pursuer, almost as a reflex reaction.

However, the ‘client’ Leo punches unconscious happens to be the crooked cop Otomo (Nao Ohmori) – it seems that Yuri is a pawn in Kase’s plan to steal and resell the drugs he’s taken from her pimp Yasu, he then plans to frame her as the hooker ‘Monica’.

With his own demise hanging over him, Leo feels immune to fear and inhibition. He makes off with Otomo’s police badge and in defending the helpless and damaged Yuri, he involves himself in the war between the Triads, the Yakuza and the police over the stolen drugs.

“This is fucking wild!” is the exclamation of one character during a particularly crazy car-chase across Tokyo over the course of a long and very violent evening. Given that the character is bleeding out while being tossed about on the back seat of a spinning vehicle chased by both the Yakuza and the Triads, it’s pretty good description of the ride that Miike takes us on.

Violence is a regular tool in Miike’s kit, as demonstrated over the course of a career that spans more than 100 movies. He made his name with Western audiences with violent cult favourites Audition (1999) and Ichi the Killer (2001) and the more traditional martial arts films 13 Assassins (2010), Hara-Kiri: Death of a Samurai (2011) and Blade of the Immortal (2017).

The plot of First Love involves a multitude of characters from the criminal underworld, as well as the innocents that get caught up in the fray. The film is so crammed that it demands attention to sort out the many characters and their agendas, but being a Miike movie, there is no shortage of bloodlust, crazed killers and action with a high body count, as the story builds to an explosive showdown inside, of all places, a Homebase-style hardware store.

As the aforementioned gangster’s outburst suggests, the film is certainly ‘wild’, and in the most excessive and ridiculous way, but the reason First Love engages is because director Miike and screenwriter Masa Nakamura are hoping to deliver more than just blood and carnage. The film’s title has a touch of causticity, because this film really isn’t about a budding romance between Leo and Yuri. The title more likely refers to the primary passion that dominates the lives of its various characters, be it boxing, money, ambition, power, honour, loyalty or sex.

Miike doesn’t treat any of the storylines here particularly seriously but, seasoned filmmaker as he is, he knows how to create significant tension which keeps us watching, intrigued as to how it might all play out. First Love is the kind of film that is a treat for genre fans who are familiar with Asian gangster tropes but appreciate seeing them taken in some new directions and treated with a refreshing dose of irony and satire.