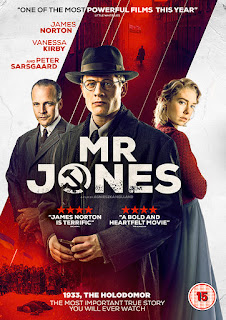 History is today's topic as Steve Taylor-Bryant learns about a journalist who discovers that Stalin is killing his own people as he watches Mr. Jones...

My initial line to start this review was ‘A story of fake news and human tragedy’ and, whilst the larger part of the story played out in Mr. Jones is exactly that, my line just simplifies something that is much more complex than that, that even today would be brave, and I don’t want anyone to think that my review utterances don’t take the subject matter seriously. Because I did take the film seriously, as did the filmmakers, but when a story is as large as the Holodomore, Stalin’s Famine, you can only pick one small part of it to make a statement about. Writer, Andrea Chalupa, and director, Agnieszka Holland, picked journalism and one brave journalist in particular, Gareth Jones (James Norton), to bring light to a dark chapter of the world's history, and it is the world's history not just Russia’s, as the world, as you are shown in the film, stood back and did nothing.

The man-made famine in the Soviet Union, Ukraine in particular, is a slice of history not often taught. Certainly, in my history lessons, we learned about Hitler in the 1930’s before the war started but little if anything was taught about Russia’s impact on history. In the last few years, due to my obsession with the Cold War, I have taught myself much about Russia and the Soviet Union from the 1960’s to the present day but am only just beginning my journey into the early twentieth century when it comes to Russian history so I didn’t know about Gareth Jones, I didn’t know much about the Pulitzer prize winning Walter Duranty (Peter Sarsgaard), and I finished the screening of Mr. Jones with tears in my eyes and a heavy weight upon my soul. The cast and crew of Mr. Jones did not shy away from tackling some very dark and harsh realities and the entire Ukraine sequence of the film with near black and white silhouetted palette and unnerving score plays more like a horror film than a picture of historic events. There are chanting children, a scene of cannibalism, and a feeling of utter despair that creeps from the screen and into your bones that makes Mr. Jones a powerful film indeed.

The story is a fascinating one, a young journalist, fresh from interviewing Adolf Hitler and now working for Prime Minister Lloyd-George, departs to Moscow on a mission to gain an audience with Stalin. Upon his arrival he learns that his colleague and friend has been tragically killed in a robbery but another journalist, Ada Brooks (Vanessa Kirby), believes it to be the work of the Soviet Secret Police because of a story he had been working on in the Ukraine. Jones blags his way into an authorised trip to the region and slips his Soviet guide to escape into the countryside for himself where he discovers famine, empty village after empty village, parentless children surviving by eating tree bark, and dead bodies being disposed of en-masse in an almost matter of fact way. Upon his arrest and eventual return to Moscow he is freed after promising to not tell the world what he seen, or the Soviet’s will execute six British workers they have convinced the world were committing espionage. Jones returns to the United Kingdom where there is pressure from the government to recant his testimony about the famine, but he is convinced by George Orwell (Joseph Mawle) to tell his truth, a truth that inspired Orwell to pen Animal Farm. After being discredited by his peers, Jones finally finds a publisher willing to tell his story and goes to print with not only what he sees Stalin doing to his own people but with the fact that Duranty and the world's media are helping to cover it up.

Mr. Jones is a stunning film, it is powerful, evocative, important and moving. It is written well, takes the aforementioned complexities of the Soviet ideology and tells its own truth in the best way it can, and it does so with fantastic performances from every cast member, and some cinematography and score work of the highest order. Yes, it is about fake news and human tragedy, but it goes deeper than that. I urge everyone to watch this incredible piece of cinema and I dare you to not finish your viewing without being moved or educated.