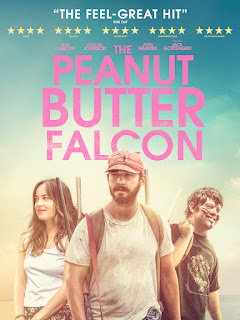 The Peanut Butter Falcon tells the story of Zack, a young man in his thirties with Downs Syndrome stuck in a care home with no family. He shares a room with an elderly man, Carl (Bruce Dern), under the care of Eleanor (Dakota Johnson). Zak dreams of being a wrestler and wants to run away to the Saltwater Redneck wrestling school run by his wrestling hero (Thomas Haden Church). After escaping his home, he hides in a boat run by crooked fisherman Tyler (Shia LaBeouf). Together they learn about life, drink, and become allies in a world that neither seems suited for.

I thought this film was going to be some kind of devastating emotional spiral I would have to live through, as most films involving disabled actors tend to ride a fine line between utter tragedy and just sadness but, my word, The Peanut Butter Falcon is not that type of film at all. It is a buddy movie with a heart, some of the most compelling acting, a bluegrass style soundtrack, and some highly humorous moments. I was not too aware of Zack Gottsagen or how his performance would go, I knew his name from a press release for another film that Maggie Gyllenhaal is starring in (Best Summer Ever – a teen musical later in 2020) but, right off the bat, I found him charming, cheeky, talented, but most all I really liked him, and it was his screen chemistry with a reborn Shia LaBeouf that stood out above all else.

LaBeouf is an actor I have always tried to like because, even in really bad movies, he seemed to try harder than anyone else, but there are only so many bad films a viewer can sit through before you have to eventually give up on somebody and put all the bad films down to bad career choices, or poor craftmanship. However, in The Peanut Butter Falcon, and in what I have seen of Honey Boy, it appears my initial thought that LaBeouf was indeed a talent looking for the right vehicle was the correct one. LaBeouf as Tyler is highly watchable when not sharing the screen with Zack but, when the two of them are together, it really is very special to watch. There is an obvious kinship between the two men, a brotherly love and respect and that shows in the portrayals given. Add in some Bruce Dern, which is always worth the entrance price of a movie, some stunning yet realistic cinematography from True Detective’s Nigel Bluck and you get a wonderful film where, whilst it deals with some real life issues, especially for Zack abandoned in a care home and Tyler struggling with the daily grind, everything just seems to be done with a tinge of hope and a slice of happiness.

It is a truly remarkable film, a well written and directed story with two men in the lead roles that you just can’t take your eyes off.