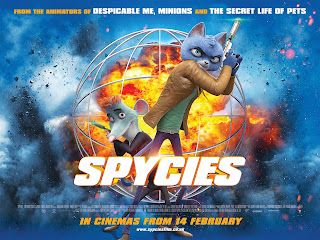 Susan Omand's mission, which she chose to accept, was to watch Spycies, now out on DVD, thanks to Kaleidoscope Entertainment...

OK, imagine the Mission Impossible films but Tom Cruise is a blue cat.

That’s pretty much the best way I can describe Spycies to you, the new animated film from the animators of Despicable Me, Minions and The Secret Lives of Pets. The suave blue cat’s name is Vladimir… Vladimir WILLIS and, yes, he does spend some of the action sequences wearing a white vest in homage to his namesake. But I’m getting ahead of myself here.

First up, there’s an opening flying bike chase sequence that the Bond and Bourne films would BOTH be proud of as Secret Service agent Vladimir tries to retrieve an important briefcase which has been stolen by leopard bad guys. Thousands of pounds worth of destruction, hundreds of damaged buildings, seventeen injuries (and a thank you note from a pair of hippos) later, Vladimir is dragged up in front of his boss and receives a disciplinary posting to the offshore platform where an expensive energy resource, Radiuzite, is being produced, with the sole instruction to keep it safe and not let it get stolen. It is here that he meets Hector, a rat with a ginger buzzcut and a penchant for Hawaiian shirts and pizza, who is a rookie secret agent who also happens to be a tech guru. Hector is also an aficionado of daytime TV soaps, there obviously being very little else to do on the rig, and is madly infatuated with one of the stars, Mia, a wasp (stay with me here, this becomes important later).

It’s obvious then that there’s an invasion of the rig, the Radiuzite gets stolen by suspicious looking people in yellow Hazmat suits and a huge and impressive set piece fight follows as Vladimir and Hector battle with bad guys and drones in an attempt to get the stolen compound back, all to no avail. Vladimir’s boss reads the riot act to them, AGAIN, and they are sent on an undercover mission to try and retrieve the stolen Radiuzite from the hospital it has been tracked to, a hospital which, serendipitously, actress Mia has also checked into, in order to have an antennae shortening procedure so that she can take on her first film role, in a spy movie.

Highly entertaining chaos ensues as there are explosions, deceptions, chases, battles, secret chambers, leopards with maps, kidnapped rhinos, love stories, good guys who are bad guys, bad guys who are good guys, bad guys who are bad guys, a coffee guzzling snake and some of the best fight sequences that I’ve ever seen in kids’ animation. Because, yes, it is a kids’ cartoon and, yes, the moralising of part of the plot feels a little shoe-horned in because of that, but the characters are all highly fun and engaging, the storyline, in the main, is very clever and as suspenseful and exciting as many a grown-up action movie and the animation style is absolutely faultless. There are laughs aplenty (keep an eye on the frog in the boss’ office) , with lots of little “in” jokes to be spotted, there’s suspense, there’s even a few sad bits, and I found it to be a thoroughly enjoyable afternoon’s entertainment, suitable for all.

Oh, and do stay for the post-credit scenes… hahaha, oh DEER!