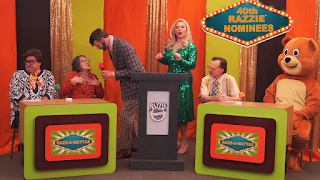 With the Oscars now a mere memory, voting members of The Golden Raspberry Awards have been hard at work making their selections for 2019’s Worst Achievements in film - and there was a LOT to choose from! Susan Omand picks her winners/losers...

In a change to the usual format, where the winners were usually announced on the eve of the Oscars, so that would have been last weekend, this year it was only the nominations which were announced with the Winners' show (yes "show" as it is to be televised this year) still to come.

However, the nominations have not disappointed (or maybe they have, depending on if you were nominated or not) and, as widely expected, Cats was the one that came top of the flops with NINE nominations! Now, considering there are only eleven categories (one of which is a "good" award for the Razzie Redeemer), nine is pretty good going - that's one for each life I guess.

Hot on their heels/paws though was A Madea Family Funeral and Rambo: Last Blood which both got 8 nods followed, maybe slightly surprisingly, by last year's incarnation of Hellboy with five. Oh, hell, boy they didn't like that film did they?

I mentioned the Redeemer award; in case you don't know what it is, the Redeemer award goes to previous Razzie winners who have actually come good and done something worthwhile and this year's nominees include Will Smith (I thought Aladdin may have been nominated in the "proper" Razzie categories but no, they seemed to like it) alongside Keanu Reeves (who can do no wrong anyway) J-Lo (for Hustlers which is fair enough) Eddie Murphy (for a film I hadn't even heard of) and... Adam Sandler? Wait... does this mean Adam Sandler was GOOD in a FILM??

Anyway, you can watch the full announcement show here (it's ok, it's only five minutes and it's a good giggle... or extremely annoying if you're me but at least it's short) then check out the list of nominations below with my ** WILL 🍓 ** (yes, I know it's a strawberry, the emoji thing didn't have a raspberry) marked so you can point and laugh later when I don't get any of them right, because what do I know? Don't answer that...

The nominations were announced on February 8th, 2020.

Cats – Lee Hall and Tom Hooper; based on the musical by Andrew Lloyd Webber, which was based on Old Possum's Book of Practical Cats by T. S. Eliot ** WILL 🍓 **
The Haunting of Sharon Tate – Daniel Farrands
Hellboy – Andrew Cosby; based on the Dark Horse Comics character by Mike Mignola
A Madea Family Funeral – Tyler Perry
Rambo: Last Blood – Matthew Cirulnick and Sylvester Stallone; based on the character created by David Morrell

Dragged Across Concrete
The Haunting of Sharon Tate
Hellboy
Joker ** WILL 🍓 ** just for the hell of it
Rambo: Last Blood

Jennifer Lopez – Hustlers
Eddie Murphy – Dolemite Is My Name
Keanu Reeves – John Wick: Chapter 3 – Parabellum and Toy Story 4 ** WILL BE 🍓 REDEEMED FOR HE CAN DO NO WRONG **
Adam Sandler – Uncut Gems
Will Smith – Aladdin