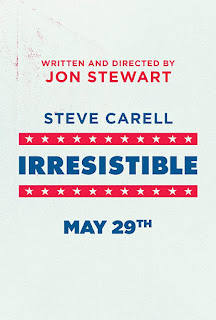 "Jon Stewart is back, and he has something to say. " Watch the trailer for Irresistible, starring Steve Carell and Chris Cooper...

From writer/director Jon Stewart comes the comedy of a Democrat political consultant (Carell) who helps a retired ex-Marine colonel (Cooper) run for mayor in a small Wisconsin town. And... that's really all we know about it so far.

Irresistible stars Steve Carell, Rose Byrne, Chris Cooper, Topher Grace, Natasha Lyonne, Mackenzie Davis, CJ Wilson and Will Sasso and hits the big screen in the US on May 29th thanks to Focus Features, with a UK release date still to be announced.