TV - I Am Not Okay With This 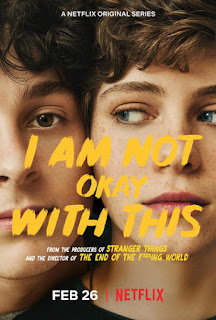 From the director of The End of the F***ing World and the producers of Stranger Things comes a new series based on the Charles Forsman graphic novel. Watch the trailer for I Am Not Okay With This, coming to Netflix on February 26th...

I Am Not Okay With This is an irreverent origin story that follows a teenage girl who's navigating the trials and tribulations of high school, all while dealing with the complexities of her family, her budding sexuality, and mysterious superpowers just beginning to awaken deep within her.

Co-created by Jonathan Entwistle and Christy Hall, the series is set in the same fictional universe as the first season of The End of the F***ing World and you may spot the odd crossover Easter Egg if you keep your eyes open. stars Sophia Lillis as Sydney, Wyatt Oleff as Stanley, Sofia Bryant as Dina, Kathleen Rose Perkins as Maggie, Aidan Wojtak-Hissong as Liam and Richard Ellis as Brad.

Oh, and if you get to episode 5 of the series, you'll apparently see much homage to The Breakfast Club as Entwistle asked all the young cast to prepare by watching John Hughes movies.