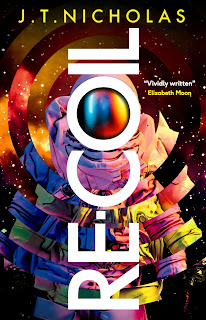 We're delighted to be taking part in the Titan Books book tour for Re-Coil, the new novel by J T Nicholas. Here, he talks about authors who have been an inspiration to his writing...

It probably comes as no surprise that I’m a fan of science fiction. I’m a fan of a lot of other genres as well, of course, but sci-fi has always been my “go-to” genre. I love the breadth and depth of the books that fall under that broad categorization. You’ve got sweeping space opera, tense military thrillers, alternate histories and futures, books that challenge societal and cultural norms, and books that are thought experiments to test moral or ethical ideals. And that barely scratches the surface. It’s amazing how many different types of stories fall under such an innocuous five-letter (plus a dash) heading. With that in mind, here are the top 5 authors who have inspired me to write science fiction. You’ll note that most of them have been around a while… well, so have I, so I suppose it’s unavoidable. 😊 Maybe the younger folks out there will find a few gems from decades past hiding on this list…

Also, these are in no particular order… I love all these authors and without their works, I probably never would have picked up a pen (yes, a literal pen, back in the day) and tried my own hand at writing. 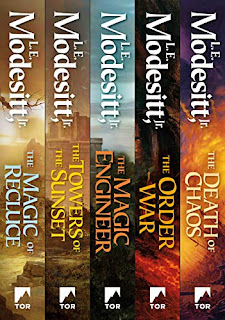 Mr. Modesitt writes the kind of books I want to write. They’re full of action and intrigue, well-defined settings and realistic prognostications of where the future may take us. But they’re also full of questions – they explore ethics and morality and the lines between good and evil. A Modesitt story is never quite as black-and-white as you think it is when it starts out, and to this day I still think about questions he raised in books I read literal decades ago. 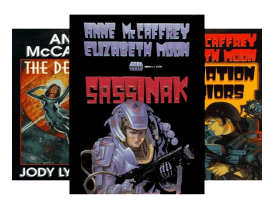 I love both these authors in their own right (I mean, come on, Dragonriders of Pern and The Deed of Paksennarion get read by me at least once every couple of years), but their military sci-fi collaboration (along with Jody Lynn Nye) in The Planet Pirates trilogy is such as awesome representation of the genre. One day I want to write some kick-ass mil-sci-fi, and these ladies are two of the biggest reasons why.

As if being the Founder (see what I did there?) of the Three Laws of Robotics wasn’t enough, Asimov’s Caves of Steel was the first time that I consciously realized that a book could be genre bending. I mean, sure, it’s science fiction, but at its heart, it’s a good old-fashioned detective story, a whodunnit murder mystery. I fell in love with that book and went on to read the Foundation series. I mean, it’s Asimov… I probably don’t need to say anything more. 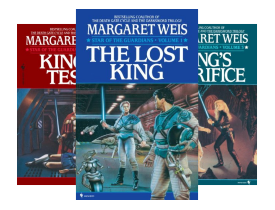 Okay, so this might border on blasphemy, but if you’ve never read Weis’ Star of the Guardians trilogy, uhm, well… as space opera goes, I think it’s better than Star Wars. These days, that might not be controversial, but I held that opinion before the prequels. Star of the Guardians was (obviously) heavily influenced by Star Wars, maybe even an homage to it, but damn if Ms. Weis didn’t get it right. Space battles, laser swords, a corrupt republic, genetically engineered super-beings… it’s got it all. Oh, and even a snarky robo-sidekick before they were all the rage. It’s still my go-to for anything space-opera. 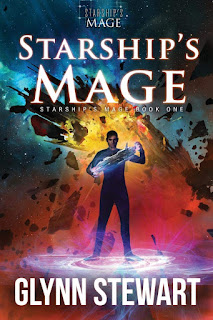 Stewart is the only “newbie” (relatively speaking… I mean, he’s got a TON of books out) on this list. That’s not a commentary on modern sci-fi…. There are some amazing authors out there today and only so much room on the list. Stewart is another of those who twisted genres in a new way for me, combining magic and technology in his own space opera setting. Granted, he wasn’t the first to do it, but for me, Starship's Mage and the books that followed just worked. They fired up my imagination and, in some ways, made me feel like a kid again. I mean, what’s better than being a wizard? Being a wizard… in SPACE! I love fantasy every bit as much as sci-fi, and admire anyone who can logically and seamlessly blend them like Stewart does.


Ugh… in writing this, I realize there are sooooo many authors I love that I’ve left off this list… but if I tried to name every sci-fi author I’ve read and loved… well, ain’t nobody got time for that. Instead, I’ll leave you with the obligatory plug – if you want to see how these folks inspired me, go pick up Re-Coil (available March 3rd).

Thanks to J T Nicholas for sharing this article with us. Follow J T Nicholas on Twitter @JamesTNicholas and find the rest of the tour articles on the websites listed below. 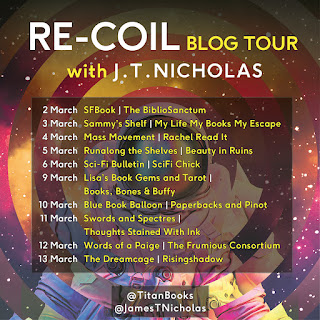