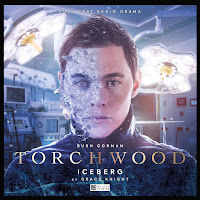 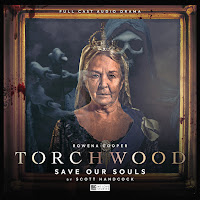 Story details and cover artwork have been revealed by Big Finish for two upcoming full-cast audio dramas in their 2020 Torchwood range...

Hunger for new Torchwood adventures has reached fever pitch since the complete television series was added to BBC iPlayer back in February. Now Big Finish have added two more stories to their upcoming Torchwood slate.

In May, Burn Gorman returns as Torchwood’s Owen Harper, in a creepy medical story and then Rowena Cooper is back as the redoubtable Queen Victoria for July’s tale.

Each of these Torchwood releases is now available for pre-order as a collector’s edition CD at £10.99 or on download from the Big Finish website at £8.99.

Dr Owen Harper’s called to the hospital. There’s a ward full of remarkable coma patients and more are coming in. Each patient came in with a dead relative as their imaginary friend.

Has Owen really discovered a bridge between the living and the dead?

Find out more and pre-order HERE.

Save Our Souls by Scott Handcock

An experimental radio mast has been set up on a remote island. It has been picking up signals – a voice that claims it knows the future.

Five people have come to the island to hear the voice. A scientist, a soldier, a medium, an alienist and the most powerful woman in the world. The voice has something to say to all of them. It starts by saying who will be the first to die.

Find out more and pre-order HERE.


Producer, James Goss said: “Grace has written what's both a quiet character piece about ‘Why is Dr Owen Harper such a piece of work?’ and also an epic alien invasion story. It all begins with a late-night phone call and a ward full of coma patients who wake up only to talk to the dead.

“Meanwhile, as part of our mini-celebrations of Queen Victoria's bicentennial year, we've another look at the early days of Torchwood. As a voice starts to predict the future on a remote island, it's a chilling blend of Agatha Christie and MR James.”


Subscribers to the Big Finish Torchwood range can save money by pre-ordering a bundle of forthcoming stories. A six-release bundle is £60 on CD or £50 on download, or you can save even more money by ordering all twelve Torchwood releases together at £110 on CD or £94 on download.