CLASSIC DOCTOR WHO ON BRITBOX – The Dominators 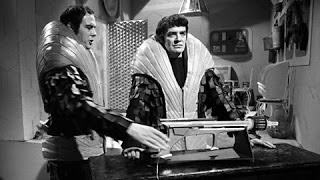 On 26th December 2019, 627 pieces of Classic Doctor Who content were made available to Britbox subscribers. Every Sunday in 2020, our Doctor Who expert, Tony Cross, looks back at some of the classic stories. Here is the Second Doctor adventure The Dominators...

The Dominators is the worst Patrick Troughton story I have watched. So far. It was written by Haisman and Lincoln but after a series of rows between the writers and the producer Derrick Sherwin led to it being credited to Norman Ashby. *

The Dominators themselves are basically angry men dressed in woodlouse carapaces and carpet samples. Rago (Ronald Allen) spends most of his time shouting at Toba, his subordinate (Kenneth Ives) whilst Toba spends most of his time shouting at Dulcians, killing them and blowing stuff up. I bet The Dominators have a fantastically ugly social networking culture as it sounds like a society of Twitter eggs.

Also, why are they called The Dominators? Was there a marketing meeting where they decided that they couldn't possibly call themselves after their home planet but needed something with a little more oomph. Unless, in Terry Nation style, they come from a planet call Dominatus.

They back up their shouting with the Quarks. The Quarks are supposed to be terrifying killing machines but are basically boxes upon boxes upon child actors with little squeaky voices. It's especially amusing when you first see one as Morris Barry, the director, has kept them hidden away until CLUNK they're there. They waddle across the island in unconvincing fashion carrying all the threat of a tissue box. The fact that the villains of the story are basically either shouty men having a work-based argument or waddling boxes doesn't help.

Then -and this perhaps annoys me more- is the portrayal of the Dulcians. This story is a child of the late-60s so it's a commentary on the 'peace and love' movement and it seems to conclude that a belief in pacifism would lead to a society that does nothing but talks. The Dulcians seem incapable of action (or sensible clothing choices). So, they're the wettest society in Doctor Who so far. The Dulcians make the Thals from The Daleks look like West Ham's Inter City Firm.**

The only Dulcian with any gumption appears to be Cully (Arthur Cox) who is the son of the Director Senex (Walter Fitzgerald). Unfortunately, everyone treats Cully like a clown so when he tries to explain that they've been invaded no one believes him. Even the government.

Their government is a group of old, white men who seem to like discussion for the sake of discussion and whose top man for dealing with emergencies, Tensa (Brian Cant. BRIAN CANT!!!)*** arrives and basically, says 'We might as well wait.' They get shouted at by Rago, Tensa gets murdered and still, nothing happens.

The thing is you could have made the Dulcians damn brave. You could have had Senex respond to Rago's murder of Tensa by explaining that they don't believe in war or violence but that doesn't mean they aren't prepared to do everything short of violence to stop being made slaves. That the Dominators would have to kill them all one by one. Yes, it might have been futile, but it would have made the Dulcians look less like a whinge about hippies and more a reflection of the real courage of those who believe in non-violence: people like Gandhi and Martin Luther-King. But no, they're pacifist so they must be useless.

I'm trying to write more about this story but I'm finding it almost as much of a chore as actually watching it.

It's only saving grace is that Troughton is as majestic as usual. If it wasn't for him, Frazer Hines and Wendy Padbury (who I feel is still finding her feet) then this story would be my least favourite Doctor Who story of all time. In fact, it still might be that. This makes The Underwater Menace look like Macbeth.

*A story told well on The Dominators DVD extra.
**Insert 80s Football 'firm' of your choice.
***Brian Cant is a big deal in The DreamCage. He's a key part of my childhood.