CLASSIC DOCTOR WHO ON BRITBOX – The Macra Terror 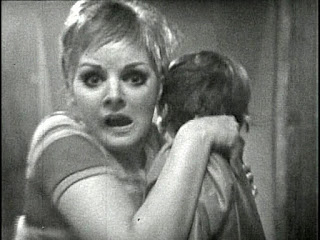 On 26th December 2019, 627 pieces of Classic Doctor Who content were made available to Britbox subscribers. Every Sunday in 2020, our Doctor Who expert, Tony Cross, looks back at some of the classic stories. Here is the Second Doctor adventure The Macra Terror...


The Macra Terror is fabulous and alas, doesn't exist in the BBC Archives. With the exception of a few short clips. So I watched this in 'Reconstruction Form'. I should pause here and say that the reconstructions have really helped me this time round. Last time I 'watched' these episodes I just relied on the BBC CDs. They do a good job but not as good as the Reconstructions. So, if you're going to embark on a similar exercise to mine go with a Reconstruction.

Written by Ian Stuart Black and directed by John Davies The Macra Terror is set on an Earth colony where all seems fine and dandy. People are happy, except there's something wrong.

There's a dark secret at the heart of this paradise. People see things. Big, horrible things. Things with claws: The Macra.

But there is no such thing as The Macra.

One of those people who has seen The Macra* is Medok (Terrance Lodge). He is the first person the TARDIS crew meets and after a scuffle, end up capturing and handing over to Ola (Gertan Klauber) the large and unpleasant Police Chief. It's odd that a colony as apparently joyful as this one should even need a Police Chief and Guards but Medok is a criminal and needs re-educating.

Medok's rage and accusation are seen as a sign of madness by the other colonists. They want him to be happy. But he's not.

The Doctor smells something of a rat and from this point, things begin to unravel for The Macra.**

Not before the colony tries to hypnotise the TARDIS crew into swallowing the colony's bullshit though. It doesn't work on Jamie or Polly. Jamie seems to resist it and Polly is saved by the Doctor.

But Ben is brainwashed at which point Michael Craze puts in a fabulous performance. One little tweak I noticed is that the brainwashed Ben is posher than the 'real' Ben. Listen to how Michael Craze changes his accent and delivery. He betrays his friends but still manages to save Polly from the clutches of a Macra*** even as he denies their existence. It's a rather nice touch.

I should also applaud Peter Jeffrey as Pilot. His first Doctor Who appearance. In the final episode in particular as he starts to throw off his conditioning he excels.

The story reminded me of The Prisoner, which I'm not the first person to suggest. Nor the last. The artificial jollity, the horrid music, and attempts to control the people that live in the Colony / The Village. The difference being that in The Prisoner the desire is for information but in The Macra Terror the Macra**** want gas, which makes it seem less overtly political than The Prisoner (although the politics of The Prisoner are something one can argue about forever and ever.)

However, when the Doctor, Jamie, Polly and the Pilot are shut behind the solid door and the poisonous gas starts to come in one can't help thinking of The Holocaust. I've said numerous times that there is no way that Doctor Who can do a 'historical' Holocaust story. It's would either be too dark or too filled with false optimism but it can hint at or reflect that story. It normally uses the Daleks but here it uses the Macra.*****

Or perhaps I'm reading too much into it.

I was also oddly reminded of The Happiness Patrol by this story too.

It's hard to say much more about this story as I enjoyed it so much. It's so much easier to write articles when you find things to mock. Or I find that.

Anyway, The Macra Terror, it's fab.

*There is no such thing as The Macra!

**There is no such thing as Macra!!

*****Forget what you have seen! There are NO MACRA. The Macra do not exist. [Exits article left, dragged off by large claw.]