CLASSIC DOCTOR WHO ON BRITBOX – The Moonbase 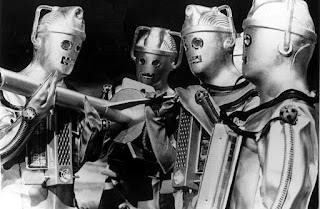 On 26th December 2019, 627 pieces of Classic Doctor Who content were made available to Britbox subscribers. Every Sunday in 2020, our Doctor Who expert, Tony Cross, looks back at some of the classic stories. Here is the Second Doctor adventure The Moonbase...


It's hard to get away from the fact that The Moonbase is basically The Tenth Planet but without Z-Bombs and snow. Here we begin to experience what will become a staple of the Troughton era: the 'base under siege'.

An isolated group - in this case, the crew of the Moonbase - are cut off and menaced by a particular foe who in today's story are the Cybermen. They're led by a man. Often loud and sometimes on the edge of a nervous breakdown under the strain of his job and the weirdness of the threat. In The Moonbase, our esteemed leader is Hobson (Patrick Barr) and he's from the school of upstanding British men calm in a crisis and as likely to break under stress as... well... as generations of television and film British fighting men. Indeed, Patrick Barr was the sort of casting that was perfect for the part after all this was a man who had played Joseph 'Mutt' Summers in The Dam Busters.

Hobson doesn't suffer fools gladly but seems to take four random strangers arriving on the Moon in his stride, even if he does have vocal suspicions about what they're up to. He's particularly sanguine for a man whose crew have started to come down with a mysterious virus.

The Moonbase is home to 'the Gravitron', which is a thing that does something gobbledigooky with gravity that affects tides and thence the weather. My suspicion is that this is scientific bunkum but I stand to be corrected.

The Cybermen it turns out want to seize control of the Gravitron and use it to destroy all life on Earth. To do this they've been sneaking into the Moonbase poisoning the sugar and generally behaving in an unnecessarily complicated manner. The reason for this is that the Cybermen are affected by gravity. In The Tenth Planet, it was radiation. Here, it is gravity. That makes no sense really. Everything is affected by gravity but I suppose the writer's needed an excuse for the Cybermen not to just walk into the Moonbase, kill everyone and operate the Gravitron themselves.

It is the beginning of Doctor Who's long battle to undermine its own monster by making the Cybermen a collection of weaknesses tucked in a silver suit. They're also killed off here by Polly's cocktail of plastic melting stuff.

They've also changed design - another ongoing Cyberman trope. No human hands, no hair dryer headwear and heavy weapons. Now they're men in silver suits. They're also supposed to be unemotional but, as in the tradition of the later Cybermen, this lot seem to be capable of gloating. They also wear fetching boots, which for some reason Morris Barry, the Director concentrates on.

I've said in earlier articles that the weakest point of a lot of Doctor Who monsters is their feet. This is as true with the Cybermen as with the Mandrels.

All of this sounds like I didn't enjoy The Moonbase but actually, it flew by in an entertaining enough way.

There's much to enjoy, especially in Troughton's performance, It's here he delivers one of the classic Doctor Who lines. The one about there being corners of the universe that have bred the most terrible things. It's not just a nice line but Troughton aces the delivery.

This story sidelines Jamie for a little while by knocking him unconscious, which gives Ben and Polly a bit more to do. I particularly like Polly at points in this story but you get the impression that the writers don't know whether to make her a peril monkey or a bit more independent. The impression of Polly you get from The War Machines is that she's more the latter and, snobbishness aside, she was pretty cool-headed in The Highlanders.

Ben and Jamie get to have a mild macho moment, which we shall pass over quietly but based on this and The Underwater Menace I'm going to stick my neck out and say Ben and Polly are definitely a thing. Yes, I'm suggesting hanky-panky in the TARDIS.

I haven't said much about Frazer Hines as Jamie yet but that's because I'm aware he's here for a while but he's settled in nicely.

Other fabulous things in this story include Nils (Michael Wolf) who does a fine line in 'serious face'. His features set staunchly to show concern. Then there's Benoit (André Maranne) who is possibly the Frenchest Frenchman ever to appear in Doctor Who. Maranne is, at least, a genuine Frenchman because otherwise, he's only a string of onions away from maximum Frenchness. He's very good though Maranne, who carved a career for himself playing Frenchmen on British television for a good chunk of the 60s and 70s.

So The Moonbase is fine. It's not brilliant but there's enough here - particularly Troughton himself - to keep you entertained. I have a feeling that tributes to Troughton's brilliance may become a common thread.