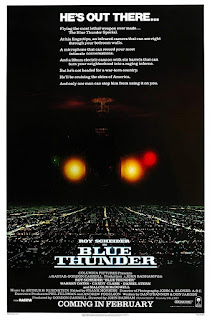 With limited release on new films and a period of isolation on the go, Steve Taylor-Bryant is going back through his older DVD collection and watching things he hasn’t viewed for a while to see how they hold up. Today is Blue Thunder...

“Grab your ankles and kiss your ass goodbye JAFO, we’re going down”

Before Jan Michael Vincent stole a prototype military helicopter in Airwolf, there was a police pilot flying above our skies, him from that there Jaws film, Roy Scheider.

Officer Frank Murphy (Scheider) is an LAPD Helicopter pilot who, along with his new rookie Richard Lymangood (Daniel Stern) helps take down two criminals who attacked a city councilwoman Diana McNeely (Robin Braxton) in what their bosses report was an attempted rape and battery resulting in McNeely's death. After being in trouble for flying off route they get grounded pending enquiry. Murphy gets pulled off suspension to be recruited for a special project and is taken to a top-secret weapons testing facility to meet Blue Thunder, a militarised helicopter that they are hoping to use for urban warfare. The test pilot is Colonel Cochrane (Malcolm McDowell) who was Murphy’s superior officer in Vietnam and tried to have him court marshalled which leads to some frosty conversations. Cochrane is a bit of a bastard and either wants to show up or kill Murphy and, I’ll be honest here, I quite like him. Struggling psychologically with dreams and flashbacks of Vietnam, Murphy has to continue and he and Lymangood (JAFO from now on as Lymangood is too long to type) get a tutorial on the Blue Thunder before they get their chance for a test flight. The Helicopter is tooled right up with all the surveillance equipment, used mainly for perverted reasons on the test flight, and hellish weaponry and in the 1980’s it was quite honestly staggering to see, though maybe not now.

Whilst flying about Murphy and JAFO realise that Cochrane and his superiors plan to use Blue Thunder for nefarious acts and that the helicopter may be the reason why McNeely was killed. They follow Cochrane to the government building, go onto silent mode and spy on the building, all the while ignoring base’s requests to return the helicopter. Murphy and JAFO overhear Cochrane and his cohorts admit to murder of McNeely and the threats to take out Murphy, but Cochrane rumbles them when he looks out of the window. Murphy gets in trouble and JAFO is being watched, so the people in charge of the project know he took the taped evidence of their guilt. They break into JAFO’s house and start to torture him looking for the tape. JAFO fights back and manages to flee despite still being bound and gagged and is pursued by uber-baddie Grundelius (Anthony James; you’ve seen him in everything) who eventually runs JAFO over killing him and then they set up Murphy for the murder. 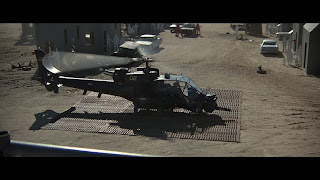 Cochrane can’t delete the tape when they get it as JAFO changed all the access codes. Murphy sneaks into the helicopter compound and listens to a message from JAFO explaining where hid the tape, so Murphy steals Blue Thunder to go searching. Murphy sends his wife Kate (Candy Clark) to fetch the package JAFO hid and gives her cover from the air. Police helicopters are dispatched to take out Murphy in one of the most ill-conceived ideas the police ever had but it’s a great chase scene for the viewers. Meanwhile, Kate has her own chase as squad cars are dispatched to get her to pull over so she cannot deliver the tape to the media. Blue Thunder to the rescue and she is off again. Kate eventually makes it to the news studio whilst the air force scramble fighter jets to take down Blue Thunder, but Murphy puts the chopper next to a BBQ restaurant so as to confuse the heat seeking missile. It is literally raining chickens! And bits of skyscraper. Murphy 2-0 Air Force jets. Murphy takes out one the jets and so Cochrane gets himself a helicopter to go in pursuit despite orders to stay grounded.

Cochrane surprises Murphy and manages to disable his cannons with his guns and injure Murphy in the process leading to more Vietnam flashbacks and now the chase is on. The TV station get the tape working whilst Cochrane and Murphy are playing aerial cat and mouse. Murphy misses the chance to shoot down Cochrane and the game continues the buildings of Los Angeles. Murphy’s turret gun is still damaged so there is no movement on it, whatever he does will have to be head on and then comes the impossible stunt, the complete loop in a helicopter leaving Murphy directly behind Cochrane and boom he’s dead! Murphy puts Blue Thunder down on a railway track and the train utterly destroys the chopper with Murphy just escaping. The media breaks the story about the corruption and the murder cases of McNeely and JAFO are reopened.

Blue Thunder may not hold up in the traditional sense as the soundtrack, computer graphics, and equipment date it heavily to the period it was filmed, however on a storytelling level, Blue Thunder is an extraordinary film, full of tension and action with some great performances. Scheider is his usual professional and reliable and a very young Stern as JAFO is full of over exuberance and naivety whilst McDowell does what he does best and chews scenery galore. The tension, the stunt work, and the filming are still brilliant and director John Badham (War Games/Short Circuit) definitely adds another solid title to his pretty spectacular 80’s and 90’s list. The story from Alien and Total Recall scribe Dan O’Bannon and his writing partner Don Jakoby (Evolution) is a solid urban adventure that in the 1980’s may have a tad unbelievable, in fact the film begins with a warning to viewers that this technology really does exist, but in our modern enlightened age, it is wholly believable.

Blue Thunder the film is still excellent entertainment, it's still better than the television series where Dana Carvey proved he’s a comedian not an actor, and as a realistic tale is certainly more palatable than Airwolf, but I still love Airwolf so you won't find me slagging that off anytime soon. If you don’t have an old DVD, or one of the imported Blu-Ray’s of Blue Thunder it's available to rent or buy for less than a fiver here in the UK via Amazon Prime.

Be a Murphy not a Cochrane, Cochrane wouldn’t wash his hands and is the type of guy to panic buy toilet roll. Stay Safe.