CLASSIC DOCTOR WHO ON BRITBOX – The Invasion 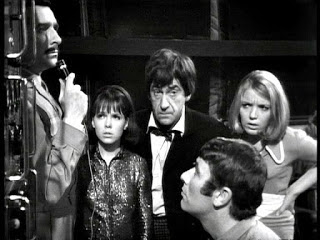 On 26th December 2019, 627 pieces of Classic Doctor Who content were made available to Britbox subscribers. Every Sunday in 2020, our Doctor Who expert, Tony Cross, looks back at some of the classic stories. Here is the Second Doctor adventure The Invasion...

The Invasion is a damn fine piece of Doctor Who. It's eight episodes long, which is the longest story we've had since The Dalek's Master Plan, but it feels less padded than a lot of the six-part stories that have preceded it. Its pretty action packed too.

The Invasion though is best known as our introduction to U.N.I.T. who are here still The United Nations Intelligence Taskforce. Led by Brigadier Lethbridge-Stewart who we last saw as a mere Colonel in The Web of Fear. It turns out that since the Yeti U.N.I.T has been set-up to investigate and deal with the 'odd and unexplained', which is what they are investigating here when the Doctor stumbles into things following a TARDIS malfunction, a missile attack around the dark side of the moon and an encounter with a soon to be dead lorry driver. Oh, and an encounter with Isobel Watkins (Sally Faulkner) who is the daughter of Professor Watkins (Edward Burnham) who is a friend of Professor and Anne Travers, which is another little continuity throwback to The Web of Fear. It's interesting to note that there's a little Travers thread running through all three of these stories.

Phew. That was a bit of an expo dump.

Here U.N.I.T. actually look like an international military organization - even when undercover. It's one of only two times they really do. The other being The Mind of Evil. They have the numbers to put up a fight with the Cybermen towards the end and throughout they look like they have the resources to do what they're being asked to do rather than being two men and a dog, which is what they sometimes look like. They're also competent, which I like.

It particularly helps that the Cybermen can be destroyed by conventional weapons even if it takes a lot of conventional weapons to bring them down so the Brigadier can do proper military things. And I like this. It makes their defeat seem less unrealistic. Yes, chances are that faced with a large army of Cybermen a conventional army would struggle but I like the idea that you could at make a good fist of it.

Having said all that U.N.I.T do carry out a raid that happens entirely off screen, which is amusing. But I suppose budgets can't stretch forever.

Nicholas Courtney does a fine job as the Brigadier. At this point, he isn't an idiot and is open-minded to The Doctor's approach and ideas. He's a military man in a difficult position doing the best he can with the resources he's got. That's how U.N.I.T. should always be in my opinion. It's not just there for cannon fodder, although U.N.I.T soldiers can be killed off with minimal emotional effect when required to make things look dangerous without risking the key cast.

There's a particularly egregious example of that in this story when Isobel and Zoe set off to London determined to get some pictures of the Cybermen after the Brigadier has been particularly patronizing towards Isobel. This trip leads to the deaths of two people: a harmless passing Policeman and a single. slightly cowardly, soldier. Initially, no one, apart from our 'Rupert'* of the week, Captain Turner (Robert Sidaway) seems bothered about these deaths. Indeed, Isobel throws a petty strop when her photographs aren't up to scratch. TWO PEOPLE DIED ISOBEL. But, to Isobel's credit shortly afterward she says sorry to Captain Turner for the soldier's death, which gets shrugged off in crisp military style. No one seems to give a toss about the Police Officer.

It's the odd thing about death in Doctor Who. It is everywhere but nowhere. Lots of people die and most of their deaths hardly impact on us at all. Grief is hard to handle in Doctor Who as is PTSD**. So, you get Rory and Amy losing their child but being unable to grieve about it properly because it's Doctor Who. No one grieves much in Doctor Who, which is understandable really because it wouldn't be on television if they did but occasionally the glibness irritates me like it did here. But not as much as it does in Tooth & Claw, which I think is the nadir of 'other people's deaths don't matter glibness' in Doctor Who.

Anyway, enough about this digression what of The Invasion, I hear you ask.

The fact it is directed by Douglas Camfield might explain it coherence and pace. Camfield is becoming my favourite Classic era Doctor Who director. He seems to know how to get the most out of the series.

Once again there's some fabulous acting. Troughton (again) is magnificent and he gets to play off against a fantastic villain in Tobias Vaughan (Kevin Stoney). Tobias Vaughan is one of the great Doctor Who villains: charming, sinister and ruthless but doomed. He thinks he has all the bases covered but then the Doctor walks in and turns all his best-laid plans to dust even as Vaughan realizes that the Doctor might be the insurance, he needs against the Cybermen. The final episode features fine scenes between the Doctor and Vaughan to which both Troughton and Stoney rise majestically. If you want to know how to play a good Doctor Who villain look at Kevin Stoney.

I also want to take a moment to applaud Peter Halliday as the poor, put-upon Packer. Packer is Vaughan's Head of Security but once the Doctor appears his reputation for competence starts to take a bit of a beating. Frankly, the Doctor runs rings around the poor man but it is Packer that points out that Vaughan's screwed up. There's also, in Halliday's performance, a creepiness to Packer that implies that he enjoys his work - which includes killing and torture - a little too much. If Stoney is an object lesson in Doctor Who villainy then Halliday is the go-to performance for the wannabe henchman.

So, there you have it. There's more to be said about this story but the point of these articles is just to highlight the stuff I get hung up on. I'm just going to say that this should be on the list for anyone who is interested in New Doctor Who and wants to dip their toes into the Classic era. It's got Troughton being brilliant, it's got Stoney and Halliday demonstrating the perfect villain-henchman partnership, it's got U.N.I.T. being cool and competent, it's got Cybermen and it's got an actual iconic moment in it as the Cybermen emerge from London's sewers.

What more do you want?

*Rupert - See the 2nd definition on this Collins Dictionary definition.

**Post-Traumatic Stress Disorder, which I'm sure you all knew anyway.