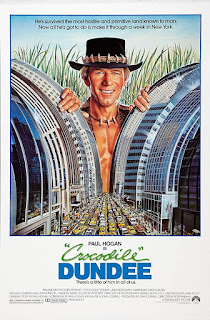 With limited releases on new films and a period of isolation on the go, Steve Taylor-Bryant is going back through his older DVD collection and watching things he hasn’t viewed for a while to see how they hold up. Today is Crocodile Dundee (1986)...

“More like a love bite really. Here ya are, enough about me leg. Let me tell you about the rest of me. "Up North in the Never-Never, where the land is harsh and bare, lives a mighty hunter named Mick Dundee who can dance like Fred Astaire".

On her way back to New York City, reporter Sue Charlton (Linda Kozlowski) decides to stop off in the Australian outback to meet an eccentric country man, Mick ‘Crocodile’ Dundee (Paul Hogan) who allegedly survived a crocodile attack and is now a bit of an outback celebrity. Charlton flies to Walkabout Creek and meets with Dundee and his business partner Wally (John Meillon) before being taken on a trip into the outback for Dundee to show her where and what happened. The journey involves Dundee imparting his wisdom, scaring off Kangaroo poachers, mixing with the Aboriginal people, and saving Charlton from her own crocodile attack. At the end of their time together Charlton decides to take Dundee back to New York with her where he discovers that city life and American culture are vastly different to his own experiences.

There is a lot to love about Crocodile Dundee. It may not be the most elegant comedy put together but it really is effective in its simplicity and good enough that the screenplay was Oscar nominated! It's also something different that came out of Australia at a time where we were only getting soap operas. Paul Hogan, as writer and star, plays his part with aplomb and there is a sense of pride that comes through his performance and all the plaudits he received were well deserved. The jokes and set pieces may very well have been simple but you still have to get them to land and I don’t think many missed the mark. Whether it's wrestling with a stuffed crocodile, the now famous ‘That’s not a knife’ scene, or the bits where he just isn’t familiar enough with people to mix with city folk, most scenes land their punchline and most scenes are still suitable to watch, which is rare considering how much disregard 80’s cinema had for LGBTQ, race, women etc.

Hogan, whilst great, does have to carry much of the film on his own though due to a quite poor job done by Kozlowski. Her performance is wooden and devoid of any emotion and her voice monotonous so I am not surprised that her career after Crocodile Dundee relied heavily on projects involving her now partner Hogan. But, Kozlowski aside, Crocodile Dundee is still very watchable, still remarkably well constructed and definitely amuses enough to pass time during an unprecedented lockdown.

Stay in, stay safe, follow the health guidelines and if you must go out for essential shopping? Stay away from crocodiles. They are snappy.