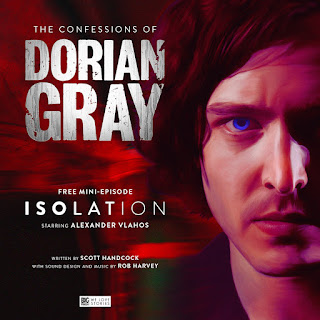 The Confessions of Dorian Gray: Isolation, Big Finish’s first audio drama written, recorded and released while the UK is in lockdown during the coronavirus crisis, is now available for free...

Inspired by Oscar Wilde's classic story of hedonism and corruption, Big Finish’s The Confessions of Dorian Gray series imagines a world where Dorian Gray was real and his friendship with Oscar Wilde spawned the notorious novel. To date, there have been 41 stories in the series, and now there is a new one to add.


London, 2020. As Dorian embarks on a train journey home, he finds himself reflecting on the world around him…

Writer/director Scott Handcock said: “The lovely thing about Dorian Gray is that Alex and I have always been on the same page. We both came to the decision to end it at the same time, and almost simultaneously came to the same thought about bringing him back somehow as a little one-off diversion from these strange times.

“So I wrote a script, Alex recorded at home, I did some digital painting for the cover artwork, and Rob Harvey joined in to give it an FX pass and some glorious music. It’s been lovely to reconnect with such generous people, giving up their time; and although Dorian isn’t returning for good, we hope this will prove a welcome reunion for listeners!”

Actor/director Alexander Vlahos added: “Obviously the world is going through a massive pandemic and is quite scary and there’s a lot of uncertainly, and a lot of creative people are coming together to cheer people up. And within the space of four days, we’ve created an 18-minute Dorian Gray episode for people - which is brilliant!”

Executive producer, Nicholas Briggs, said “Scott Handcock and Alex Vlahos’s enthusiasm for the Dorian Gray series has always been a beautiful thing to behold. The two of them just spontaneously did this, and we were thrilled to get on board with it! Enjoy!”

Listeners who are new to the world of Dorian Gray can also download several other FREE stories at the Big Finish website, as well as the five fantastic full-cast series of The Confessions of Dorian Gray.


The Confessions of Dorian Gray: Isolation is available now to download from the Big Finish website HERE and is completely free.

Note: The Confessions of Dorian Gray contains adult material and is not suitable for younger listeners.

THE CONFESSIONS OF DORIAN GRAY: ISOLATION